Hague Letter: Call for return of glamorous ‘grid girls’ has led to backlash and climbdowns 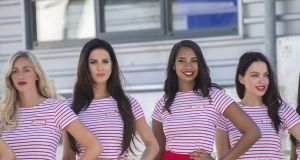 Two high-profile sports stories in the Netherlands this week are reminders that although the march towards equality of the sexes may appear unstoppable, it’s all too easy for complacency to set in, allowing attitudes towards women to be dragged backwards in the blink of an eye.

The first of those stories is the Fifa Women’s World Cup, which, not surprisingly, has seen a spike in support for the Dutch national team, optimism that an irreversible “revolution” is under way in women’s sport in general, and a flood of commercial sponsorship in pursuit of that popularity.

It was international marketing company Nielsen that underlined the first signs of this revolution in a report last year that identified the scale of global interest in women’s sport as “a massive and largely untapped opportunity for brands and broadcasters”.

Not alone that, but – even better in commercial terms – Nielsen identified a youthful audience profile for women’s sport almost evenly split between women and men, apparently giving the lie to the idea that some sports are, almost by definition, attractive to men and others to women.

Even Formula 1 motor racing took the plunge into the 21st century in 2018 when it did away with “grid girls” – who had come to be associated with the reign of the sport’s former boss, Bernie Ecclestone (88) – on the grounds that they no longer “resonated with its brand values”.

F1 is also experiencing a generational makeover, exemplified in Austria last weekend when Lewis Hamilton and Sebastian Vettel were consigned to the role of also-rans while Max Verstappen of Red Bull and Charles Leclerc of Ferrari battled it out for first place. Verstappen and Leclerc are both 21.

The huge popularity and talent of Verstappen has played no small part in the decision to revive the Dutch Grand Prix at Zandvoort, a seaside resort near Amsterdam, next year, after an absence of 35 years. First held in 1952, it continued until 1985, when the company that ran the circuit went bust.

Winners at Zandvoort over the years have included legendary names such as Jackie Stewart, Jack Brabham, James Hunt, Niki Lauda, and Alain Prost.

And yet – through no fault of the grand prix organisers – what can only be described as a bizarre aspect to this Zandvoort revival has led to the realisation that while male chauvinist dinosaurs may no longer be openly in evidence, they haven’t gone away.

A motion tabled in the Dutch parliament in June called on the government to write to the F1 authorities demanding that grid girls be reinstated at Zandvoort next year – on the grounds that they were indispensable, “as much part of the Netherlands’ motor racing tradition as the cars”.

Freedom Party MP Roy van Aalst, who tabled the motion, described the global ban as the work of “jealous social justice warriors” who regarded “pretty girls” as “a problem”, and who had not alone “patronised” the women involved but had cost them their jobs.

Although it was never going to generate enough support to go anywhere, even more bizarre than Van Aalst’s motion was the fact that it did, in fact, receive support from other parties, including Mark Rutte’s Liberals, the right-wing Forum for Democracy, and the Turkish-Dutch party Denk.

Liberal MP Rudmer Heerema was so proud of his views that he went on radio to air them further. “These sorts of girls,” he told national broadcaster NOS, “perk up events like motor racing.”

Clearly embarrassed, other Liberal MPs said they could not explain how the party, which had discussed the motion at its weekly meeting, had voted in favour of it.

Denk – whose name translates as Think – thought better of its decision once the public backlash began, and said the vote had been “a mistake” on a day when there were a stress-inducing 155 motions to vote on.

The backlash focused on Van Aalst, with one NRC journalist, Maartje Geels, asking on Twitter what it said about his suitability as a legislator “when you are a member of parliament and you believe that motor sport is as much about naked women as about cars”.

There won’t be any grid girls at Zandvoort next year, of course. Much as they might like to, the dinosaurs can’t turn back the clock.

What it shows, however, is that – to quote heroic former world champion cyclist Petra de Bruin, who broke her silence about sex abuse in Dutch competitive cycling in 2017 – the price of any real change is perpetual vigilance.