Theresa May prepares to take decisive move on Brexit 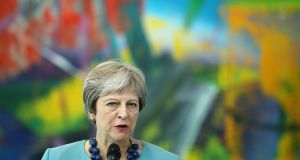 Theresa May has urged her cabinet to take “another step forward” towards a Brexit deal when they gather in Chequers today, as hardline backbenchers warned against remaining too closely aligned with the European Union.

The Irish Government expects that Friday’s meeting, billed as decisive on the UK’s approach to leaving the EU, will see Ms May definitively signal a clear move towards a soft Brexit.

However, sources in Dublin stress they will wait to see what happens in Chequers. Previous signals from London that Ms May was going to take on the hard Brexiteers in her Cabinet have only led to disappointment in Dublin.

“Extreme caution on our side” was how one senior source described it.

Leading Brexiteer Jacob Rees-Mogg said a leaked proposal for regulatory alignment to be discussed at Chequers would turn Britain into a vassal state, as Downing Street denied that the plan would make a trade deal with the United States impossible.

The Spectator reported on Thursday that a document circulated to ministers proposes that “the UK should maintain a common rulebook for all goods including agri-food” and would make “an up-front choice to commit by treaty to ongoing harmonisation with EU rules on goods”. The document says that the deal “would not allow the UK to accommodate a likely ask from the US in a future trade deal” as the UK would be unable to recognise the US’s “array of standards”.

The prime minister’s official spokeswoman rejected as “categorically untrue” the suggestion that Britain would be unable to negotiate a trade deal with the US, whose president Donald Trump visits the country next week.

On Thursday, Brexit secretary David Davis declined to deny reports that he had written to Ms May warning that her new customs proposal would be unacceptable to Brussels. The “facilitated customs arrangement” would see Britain leave the EU’s common external tariff arrangement. But all goods entering the UK would be tracked and charged the EU tariff if they are destined for Europe.

Though officials in Dublin said they would wait for the outcome of today’s meeting, the Irish Government has been encouraged by meetings the Minister for Foreign Affairs Simon Coveney held with a series of UK ministers in London on Wednesday.

It was strongly signalled to Mr Coveney that Ms May realises there is no majority in Westminster for a no-deal Brexit, sources said.

But Irish sources expressed concern that Ms May’s anticipated move would be unacceptable to Brussels, and interpreted the prime minister’s visit to Berlin on Thursday as an effort to ensure that the EU does not reject the British initiative out of hand.

Meanwhile, Taoiseach Leo Varadkar has said that a suggestion by Austrian chancellor Sebastian Kurz that Brexit negotiations could be extended after next March’s deadline would “create more uncertainty”.