Samarn Kunan (38) may be ‘promoted’ posthumously in tribute 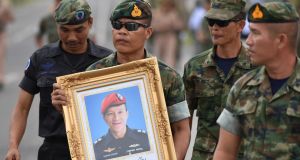 Wearing a grey polo shirt and blue, tinted glasses, Samarn Kunan (38) took a video before boarding a flight on July 1st to join Thai and international teams in northern Thailand searching for 12 boys and their soccer coach missing in a cave.

“See you tonight at Tham Luang,” said an upbeat Samarn, before signing off on the video clip and setting off for the province of Chiang Rai on the Myanmar border.

Less than a week later, Samarn, a former member of the Thai navy’s Seal unit, would die in the Tham Luang cave, the first casualty in a multinational operation to first find, then rescue the boys and their coach who went missing on July 23rd, after downpours flooded the cave network they were exploring.

Rescue divers found the 13 on Monday, huddled on a muddy ledge of a partly flooded chamber, and the search then turned into a rescue, to get the 13 out through several kilometres of dangerously flooded tunnels.

Samarn died early on Friday after he and a fellow volunteer were on their way back from placing oxygen tanks deep inside the cave. He fell unconscious, and efforts by his partner to resuscitate him were futile, the Seal unit said.

In the video clip, Samarn appeared keen to help his old unit find the boys.

“We are supporting the frogs team ... we have medical teams and divers from the navy with us,” Samarn said, referring to Thai military divers by their nickname.

The Seal unit paid tribute to their old comrade. “He was an athlete. He loved adventure sports ... no matter what activity the frogs took part in Samarn would join, until the end of his life,” the unit said in a statement.

Samarn left the unit in 2006 to work at Bangkok’s main Suvarnabhumi Airport as an emergency rescue officer.

On his Instagram account, he appeared to be an avid cyclist, posting several pictures of himself mountain biking.

In a post on Wednesday, Samarn uploaded pictures of himself in action with a rescue team, both outside and inside the cave.

A spokesman for the navy, rear admiral Chetta Jaipiem, said the navy would seek “special permission” to posthumously promote Samarn, who was a petty officer first class when he left the unit.

US Ambassador to Thailand Glyn T Davies offered his condolences to Samarn’s family.

“On behalf of the American people, I extend my deepest condolences to his family and commend his true bravery and selflessness in service to his country,” Davies said in a statement. – Reuters