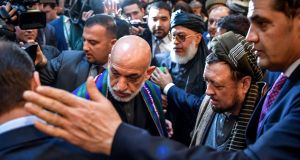 Former Afghan president Hamid Karzai arrives for the opening of the two-day talks between the Taliban and Afghan opposition representatives in Moscow on Tuesday. Photograph: Yuri Kadobnov/AFP/Getty Images

Senior Afghan politicians, including former president Hamid Karzai, began a meeting with Taliban representatives in Moscow on Tuesday, weeks after the insurgents and US diplomats announced progress towards an end to the long war.

But the two-day gathering, which will be the insurgents’ most significant contact with Afghan politicians in years, has drawn strong criticism from the government of President Ashraf Ghani, who sees such initiatives – at a time when the Taliban seem ready to meet with anyone but his own government – as undermining the fragile Afghan state.

The talks, which Mr Karzai and the other politicians say could build trust and clarify how the Taliban see their future political role, come at a delicate time. Mr Ghani is in an uncomfortable position, at odds not only with his US backers, whom he sees as moving too quickly to reach a deal, but also with others in the country’s political elite, who are rallying around the US-led effort.

Delegations from both sides arrived at the President Hotel, owned by the Kremlin, and after initial greetings in a chaotic lobby, went into a smaller private meeting to discuss the format of the talks as well as expectations for the two-day gathering. The two sides prayed together, in a prayer led by one of the Taliban delegates, and then went into lunch before convening for broader discussions.

Besides Mr Karzai, who made no real progress on peace talks with the Taliban during his 13-year presidency, the Afghan delegation includes about three dozen former officials, representatives of political parties and members of parliament. There are only three women in the group, according to a list of participants that circulated on social media before the trip began.

In a statement issued before they left for Moscow, the Afghans said they saw the meeting as building on momentum created by recent US talks with the Taliban in Qatar, and that they hoped it could lead to extensive dialogue among the Afghan parties in the conflict.

Fawzia Koofi, a member of the Afghan parliament who is attending the meeting, said she wanted assurances that women’s rights would be respected in any power-sharing arrangement with the Taliban.

“In our initial meeting,” she added, “I said they need to align themselves with the progress as Afghanistan is not turning back. Anyone who wants to do politics in Afghanistan needs to respect the human freedoms, including the rights of women.”

The Taliban delegation is led by Sher Mohammad Abbas Stanikzai, who until recently was the insurgents’ chief negotiator at the talks in Qatar. In a statement confirming their participation, the Taliban said they would present their views on how to reach “an understanding with non-government Afghan political groups”.

Last month, a delegation of US diplomats, led by special envoy Zalmay Khalilzad, and the Taliban held marathon talks for six days in Doha, Qatar’s capital. Both sides said they had agreed, in principle, to a framework on two issues: a Taliban guarantee that Afghan soil would never again be used by terrorist groups such as al-Qaeda, and a pledge from the United States to withdraw its troops.

The next step, which would involve discussing the future of the Afghan government, has proved daunting. The insurgents have refused to meet anyone from Mr Ghani’s administration, instead reaching out to other political figures and parties.

“Some people are calling this meeting the intra-Afghan negotiations. It isn’t so – this has political aims,” Fazl Fazly, Mr Ghani’s chief adviser, said on a radio station. “No decisions will be made there. Whatever is said in this meeting, neither the host country nor the meeting’s participants can guarantee its implementation.”

Many Afghans are concerned that the Americans might be too eager to strike a deal, given that the Taliban have not clarified their views on fundamental issues – including the future of Afghan women, who were denied rights and a role in public life when the Taliban held power before the American invasion in 2001.

In a statement released before the Moscow meeting, a group of Afghan women objected to the domination of the peace process by men and by non-Afghans. They said Afghan women had been marginalised in talks about a future in which they had more to lose than anyone.

The statement called on the Afghan delegation to stand up for the country’s 17-year-old democratic system, which has given women more space and more rights, even if some of those rights are still routinely violated.

“Afghan women would not accept peace bought at the cost of their hard-gained freedoms,” the statement said. “We believe that any peace that threatens Afghan women’s rights, freedoms and gains will not be sustainable.”

Unease about the Taliban’s long-term intentions was recently stoked by Mr Stanikzai, the negotiator, who in a videotaped interview offered little clarity on the insurgents’ current stance on human rights. He also suggested that the Afghan military – numbering more than 300,000 soldiers, and built at enormous cost – would have to be disbanded after a final peace deal was reached, because it was formed by the Americans.

That statement was widely denounced in Afghanistan. Mr Ghani, in an angry response, alluded to the collapse of the Afghan army after the Soviet Union’s withdrawal in the late 1980s, which led to anarchy.

“These movies of looking down at our troops – we have seen these before. And what was their conclusion? The destruction of Afghanistan,” Mr Ghani said in a meeting with families of Afghan soldiers who died fighting the Taliban. He added: “Do you want our tanks, our planes, to be sold as scrap metal again to the neighbouring countries? Which Afghan will accept that the resources of the forces, built on blood, will again be sold as scrap metal?”

On Tuesday, the violence continued unabated in Afghanistan. The Taliban attacked police and army outposts around the northern city of Kunduz before dawn, killing at least 23 members of the Afghan security forces and capturing two of the outposts.

“When in one outpost 10 local police were surrounded by the Taliban, I went to support them, but the Taliban attacked me and killed two local police near the outpost,” said Mohammed Ibrahim, a commander of local police militias supporting the Afghan forces in the area. – New York Times

1 Bus Éireann to shut many inter-city routes due to financial pressures
2 Coronavirus cases rise in most counties but rate of increase is slowing
3 Covid-19: Possible extra restrictions for four counties to be decided by weekend
4 Eighteen revelations from a trove of Trump tax records
5 Donald Trump's taxes: US president paid $750 federal income tax the year he won the election
Real news has value SUBSCRIBE