Paris fire: ‘I see my neighbours crouched on their balconies, screaming for help’

Eyewitness footage captures the extent of a fire in a west Paris apartment block, the blaze is believed to have started from an arson attack. Video: Reuters 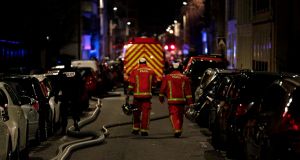 Firefighters and a police officer are seen near a building that caught fire in the 16th arrondissement in Paris. Photograph: Geoffroy Van der Hasselt/AFP 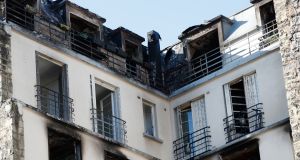 View of the apartment building where a fire broke in Paris. Photograph: AP Photo/Christophe Ena 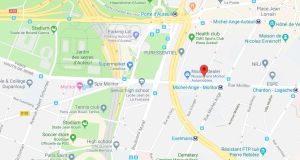 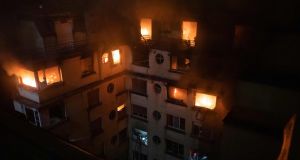 A 40-year-old woman has been transferred from police custody to the psychiatric unit at the Paris prefecture, after being arrested on suspicion of setting fire to the Paris building she inhabited early on Tuesday morning. Ten of her neighbours died in the fire, and 30 other people, including eight firemen, were injured. At least one of the fatalities was a small child.

The suspect was recently released from psychiatric hospital, and had argued with one of her neighbours, a fireman by profession. Police visited the building to calm the dispute. Ten minutes after they left, the woman reportedly used inflammable material to start fires on several floors. She was apprehended in the street below, trying to set fire to a car and rubbish bins. Police said she was inebriated.

Clément Eschenlohr was an eye witness to the fire. On the pavement outside his lycée a few hours later, the 17 year-old was still visibly shaken. Fellow students crowded around him, speaking animatedly, many of them smoking.

Clément lives on the second floor opposite the building that burned at 17 bis rue Erlanger. Notre Dame des Oiseaux school, where he is enrolled, is adjacent to the scene of the disaster.

“My mother woke me around 1am,” Clément recounted. “She said, ‘There’s a fire. We have to get out’.” They went downstairs to the foyer, where other neighbours had also taken refuge.

“A woman was sobbing because her daughter was on the eighth floor next door. I think she didn’t get out,” Clément continued. “I went back up to our apartment several times. I saw bodies. I saw a man fall from the fifth floor balcony… I try not to think about it, but I see flames in front of me all the time. I see my neighbours crouched on their balconies and screaming for help. They were only five metres away. We closed the metal shutters, because we were afraid their building would explode, and we wanted to save our apartment.”

Clément and his friends then went into the school courtyard, which reeked of smoke. The façade of the gutted building rose up behind the school, its roof charred.  A pair of red and white striped leggings hung from a railing.

A dozen residents had waited on the roof for firemen to reach them with ladders. One hundred and twenty residents were evacuated from 80 apartments. Authorities fear they may find more bodies.

The rue Erlanger is on the edge of the Bois de Boulogne. The former president Nicolas Sarkozy and the billionaire Vincent Bolloré live in a private lane nearby. It is never a friendly, outgoing area, but on Tuesday it was in mourning. No one smiled. Residents gathered in small groups. Three fire engines were parked at the police line, alongside the television cameras.

Four 16-year-olds whiled away their free period. “We checked all the school records, elementary, college and lycée,” said a tall young man called Nicolas. “Our students were lucky. Not one of them lived in that building.”

It took 200 firemen from 1am until 6am to control the fire. When students arrived for class at 8am, the entry via the rue Erlanger was shut, so they used the entrance in the rue Michel Ange instead. The gutters overflowed with water from fire hoses. Teachers told them not to open the windows, to keep the smoke out, and asked them to pray.

Death at any moment

There was a degree of comfort in knowing that the fire was the doing of an unhinged woman, not the result of a building flaw, a student called Chloé told me. Her neighbourhood was not dangerous like the rue d’Aubagne in Marseille, where a tenement collapsed in November, killing eight people.

A pretty blonde called Marie looked particularly sad. “You see that burned building, and you think, ‘It could have been me’,” she said, echoing a sentiment repeatedly heard from others . “When those people went to bed last night, everything was normal. Death can come at any moment.”

Two ageing Lebanese women in furs and a man in a track suit, all neighbours in the rue Chanez, parallel to the rue Erlanger, stood talking. Though the fire was just a few hundred metres from them, the women learned of it when friends called from abroad. The man’s wife read the news on the internet.

Like the lycée students, the neighbours compared the shock to that of terrorist attacks in recent years. They’d felt insecure since police defused a bomb made from gas cannisters in their street last year, one of the Lebanese women said. “We’re on the lookout, all the time.”

The fire made them think about their own building. “We have a strange neighbour too,” the man in the tracksuit volunteered. “It has nothing to do with the fire, but she’s involved in prostitution and the police have visited building. You never know what could happen…”