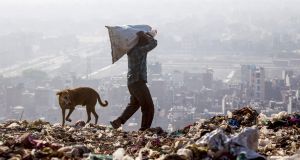 A rag picker carries a sack of sorted recyclable materials atop the Ghazipur landfill site in the east of New Delhi. Photograph: Xavier Galiana/AFP/Getty Images

India’s tallest rubbish heap in the capital New Delhi is likely to exceed the height of the Taj Mahal monument by next year.

The 35-year-old Ghazipur dump, in the eastern part of the city, which reached its optimum capacity in 2002, is already 65m high, said Arun Kumar, a senior official with Delhi Municipal Corporation.

At its current growth rate of 10m per year, the dump would end up taller than the 73m high Taj Mahal by 2020, he said.

Other municipal officials said that about 20,000 tonnes of refuse is deposited daily at the Ghazipur dump. Spread over an area the size of 40 football fields, it is one of four such official landfills for Delhi’s population of more than 20 million.

In September 2017, two people died and five others were injured when more than 50 tonnes of waste from the dump came crashing down like an avalanche, subsuming several vehicles and blocking roads.

For a few days following that incident all dumping at Ghazipur was banned, but it resumed soon afterwards for lack of alternatives and has continued since without interruption.

Smoke from fires sparked by methane gas generated by the dump’s waste permanently envelops the area, rendering breathing difficult for tens of thousands of people living in a 10km radius of the site.

Eagles, hawks and vultures circle continually over the dump, which is also infested with millions of bandicoots and packs of dogs that sustain themselves on the refuse. Barefoot urchins and rag pickers carrying sacks on their shoulders are also visible atop the rubbish mountain, seeking scraps to sell for paltry amounts.

A Canadian filmmaker who recently shot scenes around the dump said a majority of locals, especially children, suffered from respiratory and stomach-related diseases, as the putrid water that flowed from their taps was black in colour.

Environmentalist activists said this was due to leachate, a black toxic liquid, which over decades has seeped into the local groundwater supply, rendering it toxic. Since the authorities had provided no alternative water source, most locals who worked as daily wage labourers or small-time shopkeepers had no choice but to imbibe the septic liquid, they said.

Local doctors have reported growing incidences of cancer and other life-threatening ailments among inhabitants and said that the average life span in the area was “abysmally low”.

Environmentals have warned that India’s population of some 1.3 billion is generating an unsustainable 62 billion tonnes of waste annually. Government officials anticipate this yearly volume of garbage increasing almost threefold by 2030 to about 165 billion tonnes.

Massive mounds of waste are visible everywhere across the country, even in high-end neighbourhoods and outside glitzy shopping malls, five-star hotels and trendy eateries. Heaps of plastic bags, empty water bottles and assorted refuse accumulate on roadsides and by railway tracks leading in and out of every city in the country. In numerous Indian cities, rubbish dumps double as direction markers.

The indifference of the federal and state governments, city planners and even local citizens have exacerbated the situation, as India’s population continues to soar and cities mushroom.