At least 100 killed by paramilitaries this week, say opposition, with bodies dumped in Nile 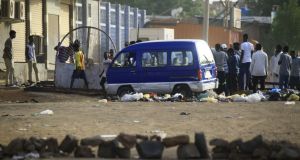 Protesters block a sidestreet in Khartoum on Tuesday to stop military vehicles from driving through. Photograph: AFP/Getty Images 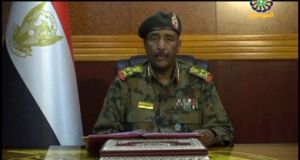 Gen Abdel-Fattah Burhan, head of the Sudanese Transitional Military Council, makes a broadcast announcement on Tuesday, in which he said the military would unilaterally form an interim government and hold snap elections. Photograph: Sudan TV via AP

Sudan’s military leader has offered to reopen talks with pro-democracy campaigners, days after paramilitary troops in the capital broke up a two-month sit-in and killed at least 100 people, according to opposition groups.

Gen Adbel Fattah al-Burhan, head of the ruling military council, said on Wednesday that he was prepared to resume negotiations without precondition, in what appeared to be a slight softening of his earlier stance. He had previously said talks would cease and that the council would move straight to elections within nine months.

Gen Burhan also apologised for the loss of life, reversing a previous statement in which he denied there had been violence, but blamed the deaths on rogue elements.

The Sudanese opposition has opposed swift elections, saying it needs at least three years to prepare voter registration lists and rebuild democratic institutions hollowed out by three decades of dictatorial rule under the former president Omar al-Bashir. Mr Bashir was removed in a coup on April 11th after months of nationwide protests.

Gen Burhan’s apparent backtracking, possibly under international pressure, came as the extent of Monday’s military crackdown became clearer. The Sudan Doctors’ Committee, part of the association that has spearhead the protests, said that some 40 bodies had been dredged from the Nile river that runs through Khartoum, bringing the death toll to at least 100, with some 650 more injured.

Witnesses reported that the Rapid Support Forces, a paramilitary organisation that absorbed the notorious Janjaweed militia, unleashed a wave of terror early on Monday, shooting, raping and beating protesters.

Lieut Gen Mohamed Hamdan Dagalo, usually referred to by his nickname Hemeti, is head of the RSF and number two in the military council.

The internet was blocked in Sudan, making it hard to verify reports of atrocities, though video footage shot by mobile phone appeared to confirm the ferocity of the crackdown.

Dalia el Roubi, from the opposition Sudanese Congress party, speaking to the BBC, called it “one of the worst days in the history of this country”. She said she was trapped in her home, unable to leave because of the presence of RSF troops.

The Sudanese Professionals’ Association, the group that has led a protest movement that began in December, urged supporters to continue their campaign of civil disobedience, calling for an “escalation of the revolution”.

Murithi Mutiga, a project director of the International Crisis Group, said it was possible that US and European pressure on the military council’s backers in the United Arab Emirates and Saudi Arabia had caused Gen Burhan to soften his tone. The official Saudi press agency had on Tuesday issued a statement saying it was watching the situation with concern and urging dialogue.

Mr Mutiga also said the military council had probably calculated that it could not suppress protests with force alone. He pointed to a recent general strike in which not only students and workers had come out, but government workers had brought ports, the airport and even the central bank to a standstill.

Middle and lower-ranking members of the army had also shown sympathy for the protesters, he noted. “What is striking is that the protest movement’s support is unprecedented, both very broad and very deep,” Mr Mutiga said. – Copyright The Financial Times Limited 2019