Over a decade after the civil war ended, the country is still dealing with its consequences 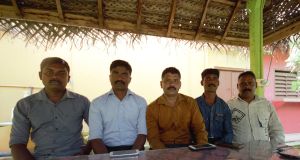 Punithan, now in his mid-40s, still remembers his induction at age 14 into the Tamil Tigers, the now defunct rebel army that once controlled much of Sri Lanka’s northern province

“It was worth more than life,” he says of the campaign. “After one successful operation, the leader of the movement called me and presented a rifle. I thought of it as a prize.”

He is seated in the courtyard of a nondescript guesthouse in the northern town of Kilinochchi. There are four other men with him, all ex-combatants, who were put through the Sri Lankan government’s rehabilitation programme after the war ended in May 2009. The men are aged between 30 and 45, wiry and attired in neatly pressed shirts and slacks.

More than a decade ago they wore the banded tropical fatigues of the Tamil Tigers, more formally known as the Liberation Tigers of Tamil Eelam (LTTE).

No Tiger uniform was complete without a vial of cyanide, worn on a string necklace, to be ingested in the event of enemy capture. Punithan says one such necklace was given to him when he joined. The movement also arranged his marriage. He now has three children to raise and says he is typical of his generation. They have had enough of war.

“In the final days, so many were killed or injured. There was nothing we could do. That’s why we surrendered to the Sri Lankan army in May 2009,” he says.

According to Sri Lankan government data, about 12,000 enemy combatants handed themselves over to the security forces by the time the last scrap of Tiger-controlled territory was recaptured.

Punithan speaks of the work he and his former colleagues do these days. “We grow bananas, work on chicken and goat farms, in some gardens, paddy fields. During times of natural disaster, we have helped rebuild some of the schools.”

Above the occasional squawk of a tropical bird comes a distant rumble of traffic. The nearby A-9 highway bisects Kilinochchi and is a key trunk road, connecting the northern province, an area traditionally dominated by the Tamil ethnic group, which is mainly Hindu and accounting for 11 per cent of the population, with the rest of Sri Lanka – populated mainly by Sinhalese, mainly Buddhist and accounting for 75 per cent of its people.

Between September 1998 and January 2009, Kilinochchi was also the de-facto “capital” of a mini-state run by the Tigers. In recent years, jewellery shops, ice cream parlours and supermarkets have sprung up along the A-9. Most of the bullet and mortar gouged ruins have been demolished.

In the decades following independence from Britain in 1948, relations between the Sinhalese and Tamils grew increasingly antagonistic, intermittently erupting into communal violence. By 1983, led by the notorious Vellupillai Prabhakaran, the LTTE was waging war to establish “Eelam”, a separate Tamil state in the north and east.

Now in his mid-40s, Kumar Ramalingam was a Tiger for 18 years and was still fighting when Prabhakaran was killed.

“I felt that the Sinhalese people wanted to attack us, drive us off our land,” he says of his reasons for joining, “we needed to respond to that oppression.”

Not all ex-combatants have made an easy transition to civilian life. Says Tharshan Mariyaneshan (32): “Sometimes we see those people, we feel very guilty. We have jobs but sometimes, those guys are begging on the roads so the government should give support to those, that’s what we feel.”

Punithan concurs: “In this generation, there are lots of guys addicted to drugs because there are no jobs.”

The land north and east of Kilinochchi, on this visit shortly before the coronavirus pandemic brought a halt to the country, is a lavish panorama of blues and greens. But the scenic beauty can be deceptive. The war to establish Eelam came to a cataclysmic end here in May 2009.

The numbers killed in the final weeks of the war are a matter of contention, with estimates ranging from several thousand to more than 40,000. There is still a considerable military presence in the north and a draconian Prevention of Terrorism Act remains in place, even in peacetime, giving the mainly Sinhalese security forces wide powers of arrest.

Moreover, the government fears the activities of the Tamil diaspora, elements of which remain sympathetic to the concept of Eelam. On November 27th last, a date known in Tamil areas as “heroes day”, a government ban was issued on public commemorations of slain LTTE fighters.

Punithan and his colleagues were already in custody in October 2009 when the Sri Lankan government established the Bureau of the Commissioner General of Rehabilitation (BCGR). With an initial budget of 150 million Sri Lankan rupees (€650,000) per month, the BCGR operated within the ministry of prison reforms, establishing 24 centres, four of them for female combatants. In addition, 594 child soldiers were identified, 273 of them being sent to a Hindu college in the south of the island.

The military still plays a key role in the lives of former fighters. In February 2020, Maj Gen Dharshana Hettiarachchi was appointed rehabilitation commissioner general. His office is located in the capital Colombo, 335km south of Kilinochchi.

Over a 36-year career, he fought the LTTE in numerous battles in the north. He describes the process of psycho-social profiling that ex-Tigers underwent, followed by vocational training including masonry, carpentry, computer technology and food preparation.

Under the avowedly nationalist president Gotabaya Rajapaksa, Sri Lanka’s ruling administration has emphasised stronger economic ties with China, and a greater commitment to national security, particularly in the wake of a string of Islamist attacks at Easter 2019 that killed 277 people.

In January 2020, Rajapaksa admitted that 20,000 people missing from the war are almost certainly dead. Moreover, some missing cases involve civilians said to have been still alive after hostilities ceased.

This is illustrated with particular poignancy by Jeyakumari Balendran. She arrives with her daughter Vibooshika (18) at a secluded location in Vavuniya, a town about an hour south of Kilinochchi.

Holding up her mobile phone, a grainy image materialises of her son, Mahintan (15), engaged in exercises with dozens of other teenagers in a government-run rehabilitation centre in the southern district of Kandy in June 2009. He never returned to his family and the widowed Mrs Balendran emerged as an activist for the war’s missing, something that has earned her the ire of the local security forces.

“They are calling me LTTE,” she says. “That is their version of this: every Tamil is LTTE. They say that I support the LTTE but I did not.”

For his part, Gen Hettiarachchi is adamant that no civilians were lost in the rehabilitation centres.

“Those who came for rehabilitation were registered and the ICRC [International Committee of the Red Cross] was monitoring that registration process. Nobody can say that those who have entered for rehabilitation have gone missing. That’s a completely baseless allegation,” he says.

Men like Punitan and his former comrades are almost all that remain of the LTTE, at least within the northern province. According to prominent Colombo-based human rights activist Ruki Fernando, most Tamils do not espouse a revived militancy, at least not for now.

“We’ve come back to a situation of a demand for a power-sharing arrangement within the framework of a united Sri Lanka,” he says.

“If our society as such and the governments fail [the Tamil minority] again, we risk having some LTTE-type organisation coming again.”