Covid-19: Proposed £500 payout for anyone testing positive in England 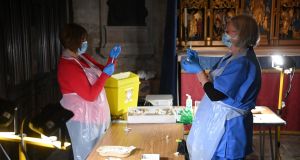 The Pfizer-BioNTech vaccine being prepared at a vaccination centre in Salisbury Cathedral. The British government is aiming to have vaccinated all the most vulnerable by next month. Photograph: EPA/NEIL HALL

Everyone in England who tests positive for Covid-19 could automatically be given £500 (€562) as part of plans ministers are reportedly considering to boost quarantine compliance.

The proposal is said to be the “preferred position” of the Department of Health and Social Care (DHSC), according to a leaked sensitive document seen by the Guardian.

The overhaul, the paper reported, has been prompted by Government polling indicating that only 17 per cent of people with symptoms are coming forward for testing, while just one-in-four comply with rules to self-isolate for 10 days after testing positive and 15 per cent continue to go to work as normal.

The Resolution Foundation, a think tank that has previously calculated only one in eight workers qualify for the financial support currently offered to those told to self-isolate, welcomed the proposal.

Researcher Maja Gustafsson said: “The current approach is not fit for purpose with statutory sick pay among the least generous of advanced economies and far too few people eligible for the £500 support payments.

“Swiftly putting in place a much more universal and generous system will make a real difference to controlling the spread of the virus.”

The DHSC said it would not comment on a leaked paper but did not deny that blanket self-isolation payouts had been mooted.

A Government source suggested it was just one of many options being discussed as part of improving stay-at-home compliance for those who had tested positive.

Prime Minister Boris Johnson has refused to rule out the lockdown lasting until the summer, while Home Secretary Priti Patel said it was “far too early” to speculate on whether restrictions would be lifted in time to allow Britons a foreign holiday during the warmer months.

Northern Ireland has confirmed its coronavirus lockdown is to be extended for a further four weeks to March 5th.

The Government’s caution in announcing a timetable to ease the lockdown has sparked fears in the hospitality industry that ministers could be preparing to tell pubs and restaurants to keep their doors closed until May, despite the Government aiming to have vaccinated all the most vulnerable by next month.

As 1,290 further deaths were reported on Thursday, and experts modelling the pandemic suggested there could be a huge surge in cases if restrictions were lifted too early.

Official figures up to January 20 showed 4,973,248 people had received a first dose of a coronavirus vaccine, an increase of 363,508 from the previous day.

Based on the latest figures, an average of 401,070 people a day will need to be vaccinated to meet the target of reaching the 15 million highest priority cases by February 15th.

The Government also said that, as of 9am on Thursday, there had been a further 37,892 lab-confirmed cases of coronavirus in the UK, bringing the total number to 3,543,646. – PA