Sri Lanka caught off-guard by attacks despite violent recent past 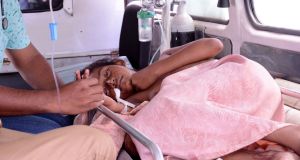 A woman lays on a stretcher at the District General Hospital in Negombo, following an explosion at St Sebastian’s Church. Photograph: STR/AFP/Getty Images

Co-ordinated bomb attacks on worshippers attending Easter church services and multiple other targets across Sri Lanka were the work of terrorists or religious extremists, a government minister has suggested.

But after the murderous wave of indiscriminate violence shocked and paralysed the country on Sunday, it seemed clear the authorities had been caught off-guard by an unknown enemy that struck without warning and without mercy.

Attempting to calm the situation, Ruwan Wijewardene, the minister of defence, described the attacks as terrorist incidents and claimed the culprits had been identified. “We have taken all the necessary precautions to keep this country safe and the people safe. All the culprits … have been identified, and they will be taken into custody as soon as possible,” he said.

That sounded optimistic. No one has as yet claimed responsibility. No one has been caught. The attackers could be foreign or local. And their motives are unclear.

The almost simultaneous targeting of three luxury hotels in Colombo, popular with foreign tourists, suggested the bombings could be the product of either anti-Western or anti-government hostility, or of hatred borne of religious fanaticism.

Another strong possibility is that the onslaught is somehow linked to, or intended to dramatise, next month’s 10th anniversary of the bloody end to the decades-long civil war between government forces and Tamil Tiger separatists in the north of the country.

One unidentified government minister admitted to the BBC that the security and intelligence services had no idea who was responsible or what their motives might be.

Sri Lanka’s overall failure to come to terms with its violent past may form part of the context for Sunday’s attacks. Much bitterness and grievance remain, and for some on both sides, the war is unfinished business. The UN reported in July last year that progress towards fulfilling the post-2015 unity government’s commitments to post-war transitional justice had “virtually ground to a halt”.

It said security forces continued to use brutal force, including torture, with impunity, and that “countless individuals” had suffered judicial abuses arising from the operation of the Prevention of Terrorism Act.

The Sri Lankan government fought a three-decades-long civil war against Tamil separatism, culminating in the bloody suppression of the Tamil Tigers’ push for an independent state. It says it does not condone torture and is committed to upholding human rights. But reconciliation has proved elusive.

“The Tamil community is stigmatised and feels disenfranchised, while the trust of many minority communities that the government is able to deal with all forms of nationalism equally, is eroding,” the UN’s rapporteur on countering terrorism, Ben Emmerson, told the Guardian in comments reported last year.

The attacks have also come against the backdrop of a sharp increase in the persecution of Christian minorities across the Middle East and south Asia. It was the Catholic congregations of three churches that appeared to have suffered the biggest casualties on Sunday, as the overall toll of dead and injured rose into the hundreds.

Sri Lanka, which is mainly Buddhist, does not have a recent history of persecution of its Christian minority, which comprises about six per cent of the population. But relations with other confessional groupings, which include Hindus and Muslims, have not always been easy.

The National Christian Evangelical Alliance of Sri Lanka, representing more than 200 churches, reported last year that it had verified 86 incidents of discrimination, threats and violence against Christians. The alliance said 26 similar incidents had been recorded so far this year, including an attempt by Buddhist monks to disrupt a church service.

In its 2018 report on human rights in Sri Lanka, the US state department said some Christian leaders had complained they were under pressure from the authorities to end or curtail services, which were deemed to be “unlawful gatherings”.

According to the Open Doors charity, a global Christian support network, Sri Lanka ranks 46th among 50 countries where Christians face “the most extreme persecution”.

A rising number of attacks has meanwhile been reported across the region, including in Pakistan, Myanmar and neighbouring India, which ranks 10th on the charity’s list. The southern Indian state of Tamil Nadu has close ethnic and religious links to northern Sri Lanka.

Open Doors links the rise in power in Delhi of the Hindu nationalist BJP party to increased insecurity. “The BJP believe being a Hindu is part of Indian identity and frequently turn a blind eye to attacks on those of other faiths,” its website states.

Narendra Modi, India’s prime minister and BJP leader, condemned the attacks and expressed solidarity with the Sri Lankan people. “There is no place for such barbarism in our region,” he said.

Imran Khan, the prime minister of Pakistan, where Christians have been targeted in recent attacks, also expressed revulsion.

North Korea, Pakistan, Afghanistan, Yemen, Sudan, Somalia and Libya are reportedly among the most dangerous countries for Christians. There has also been an increase in violence towards Egypt’s Coptic minority.

Christians and other non-Muslims were ruthlessly targeted by Islamic State– also known as Isis – terrorists in Iraq and Syria during the period of the now-destroyed Isis “caliphate”, and many were forced to flee.

In February, Jeremy Hunt, Britain’s foreign secretary, said he would attempt to build an international coalition to boost respect for religious freedom around the world, and said the UK government was reviewing the support it gives to persecuted Christian minorities. – Guardian