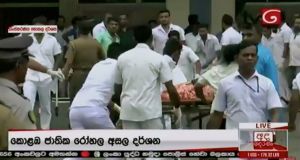 A victim is rushed to a hospital after explosions hit churches and hotels in Colombo, Sri Lanka. Photograph: Derana TV/Reuters.

The death toll from multiple Easter Day bomb blasts at Sri Lankan churches and luxury hotels has risen to 207, with 450 others injured, a police spokesman has said.

As many as 30 foreigners were killed in the attacks. One Dutch, one Chinese, one Portuguese, two Turkish and three Danish nationals have been killed, their respective foreign ministries have confirmed.

Local media in Sri Lanka reported that foreign nationals from the US, Denmark, China, Japan, Pakistan, Morocco, India and Bangladesh were among the dead, citing a national hospital spokesperson.

The death toll follows the worst violence in the country since a civil war ended a decade ago.

The government imposed an island-wide curfew as security forces try to maintain law and order and investigate the attacks. Those responsible for the blasts have been identified and seven people have been arrested so far, Sri Lanka’s information minister Ruwan Wijewardene said, without providing details.

A government-ordered blackout of social media and messaging platforms in Sri Lanka has hampered efforts by friends and family to make contact with loved ones from outside the island.

In just one church, St Sebastian’s in Katuwapitiya, north of Colombo, more than 50 people were killed, with pictures showing bodies on the ground, blood on the pews and a destroyed roof.

Media reported 25 people were also killed in an attack on a church in Batticaloa in Eastern Province.

There were no immediate claims of responsibility for the attacks in a country which was at war for decades with Tamil separatists until 2009 during which bomb blasts in the capital were common.

Prime minister Ranil Wickremesinghe called a national security council meeting at his home for later in the day.

One of the explosions was at St Anthony’s Church in Kochcikade, Colombo.

“Our people are engaged in evacuating the casualties,” a source with the bomb squad said.

St Sebastian’s church posted pictures of destruction inside the church on its Facebook page, showing blood on pews and the floor, and requested help from the public.

In a statement issued on Sunday, President Michael D Higgins said: “As President of Ireland I am sure that people in Ireland will have heard with great concern of the heavy loss of life that has happened at places of worship in Sri Lanka, at a time of religious significance.

“The right to the freedom of worship is a fundamental right.

“To the families of those who died and those who have been injured I send the sympathies and solidarity of the people of Ireland,” he said.

Minister for Foreign Affairs Simon Coveney said he was shocked at the appalling attacks on innocent civilians in Sri Lanka. “No political or other cause can justify or excuse the bombing of people at worship or simply going about their daily lives.

“On behalf of the government of Ireland I also express our solidarity with the people and government of Sri Lanka at this tremendously difficult time. Ireland strongly supports everyone’s freedom of religion and belief.

“Attacks such as those in Sri Lanka today and in Christchurch and elsewhere are a challenge to us all to do everything that we can to defend that right. Places of worship must be places of peace, free from fear.”

Last year, there were 86 verified incidents of discrimination, threats and violence against Christians, according to the National Christian Evangelical Alliance of Sri Lanka (NCEASL), which represents more than 200 churches and other Christian organisations.

This year, the NCEASL recorded 26 such incidents, including one in which Buddhist monks allegedly attempted to disrupt a Sunday worship service, with the last one reported on March 25th.

Out of Sri Lanka’s total population of around 22 million, 70 per cent are Buddhist, 12.6 percent Hindu, 9.7 percent Muslim, and 7.6 percent Christian, according to the country’s 2012 census.

In its 2018 report on Sri Lanka’s human rights, the US state department noted that some Christian groups and churches reported they had been pressured to end worship activities after authorities classified them as “unauthorised gatherings.”