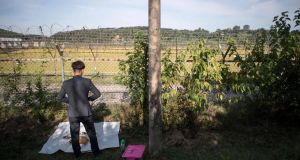 A refugee prepares to perform a ceremonial offering to relatives in North Korea, near the Demilitarised Zone. Photograph: Ed Jones/AFP/Getty Images

South Korea’s unification minister has urged North Korea to allow separated families to see their long-lost relatives – something that hasn’t happened in two years – as a first step toward peace and reconciliation.

Cho Myoung-gyon’s calls came on the 10th anniversary of an agreement reached after only the second summit between both sides of the Korean peninsula since the 1950-53 Korean War, which ended without a peace treaty.

Since the first summit in 2000, there have been 20 family reunion events allowing relatives separated by the war to spend time together, but the last one was in October 2015.

“Two years has passed since the reunions of separated families were suspended,” Mr Cho told a joint ancestral ritual for separated families at the Imjingak park, which is the near the heavily fortified Demilitarised Zone (DMZ) dividing the two.

At the 2007 summit, then South Korean president Roh Moo-hyun, and Kim Jong-il, the late father of North Korean leader Kim Jong-un, announced an agreement to work together to ease tensions.

“I once again urge North Korea to come forward to a path towards peace and reconciliation by resolving the issue of separated families,” Mr Cho said, quoted by Yonhap news agency. The ritual was held as part of the Chuseok autumn harvest festival, one of Korea’s most important holidays.

North Korea, which did not respond to similar overtures in July, marked the anniversary of the summit by accusing Seoul of ratcheting up tensions.

“It is a tragedy that ... the danger of a nuclear war on the Korean peninsula is rising at an extreme rate, even though 10 years have passed since the historic October 4th declaration was announced,” ran a typically defiant editorial in the North’s main newspaper, the Rodong Sinmun.

“The South Korean puppets are deepening the disruption of the North-South relations and further escalating the danger of a nuclear war,” it said.

The North Koreans also threatened Japan, saying in a statement on state media it would bring “nuclear clouds to the Japanese archipelago” and accusing prime minister Shinzo Abe of acting like a “headless chicken” when he called on the UN to force Pyongyang to cease its nuclear tests and missile launches.

The situation is complicated for South Korea as there have been decidedly mixed messages from its allies in Washington on how to deal with the nuclear crisis. Defence secretary James Mattis said the defence department fully supported secretary of state Rex Tillerson’s efforts to find a diplomatic solution.

However, president Donald Trump tweeted: “I told Rex Tillerson, our wonderful secretary of state, that he is wasting his time trying to negotiate with little rocket man.”