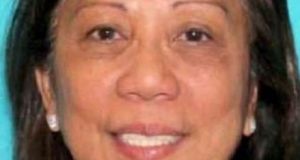 Marilou Danle is an Australian citizen but was born in the Philippines. Photograph: Las Vegas Metropolitan Police/Reuters 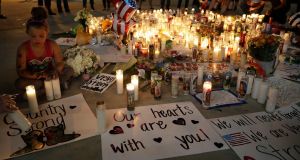 A girl places candles at a memorial for victims of the mass shooting, on Tuesday, in Las Vegas. Photograph: Marcio Jose Sanchez/AP 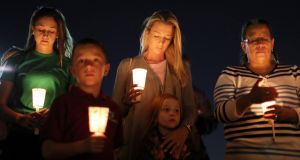 People in Las Vegas pray during a candlelight vigil for the shooting victims. Photograph: Lucy Nicholson/Rueters 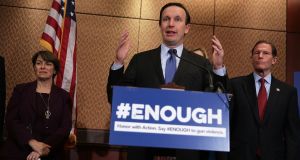 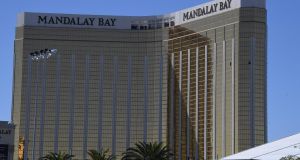 The damaged windows on the 32nd floor room that was used by Stephen Paddock in the Mandalay Hotel. Photograph: Mark Ralston/AFP/AFP/Getty Images

The partner of the Las Vegas gunman Stephen Paddock is being quizzed by police as they attempt to establish his motive for the mass shooting.

Marilou Danley (62) who was in the Philippines at the time of the shooting which killed 58 people and injured 530 concert goers, was met by FBI agents after she touched down in Los Angeles on Tuesday night.

Ms Danley, who is believed to have shared Paddock’s home in Mesquite, Nevada until recently, was described as a “person of interest” by Las Vegas sheriff Joseph Lombardo on Tuesday.

“We anticipate some information from her shortly”, Mr Lombardo said, adding he is “absolutely” confident authorities will find out what set off Paddock, a 64-year-old high-stakes gambler and retired accountant who killed himself before police stormed his 32nd-floor room at the Mandalay Bay Hotel and Casino.

Investigators are still trying to trace that money and are looking into a least a dozen financial reports over the past several weeks that showed Paddock gambled more than US$10,000 dollars (€8,494) per day, the official said.

An Australian citizen, Danley (62) was born in the Philippines, and was previously married for 25 years. Paddock is believed to have travelled to the Philippines with her in the past.

Ms Danley first arrived in the Philippines on September 15th, according to immigration documents. She departed on September 22nd then returned three days later on a flight from Hong Kong.

She was travelling on an Australian passport. Ms Danley’s Australia-based sisters believe Paddock sent her away to prevent her from interfering with his plans.

Australia’s Channel 7 TV network interviewed the sisters with their faces obscured and their names withheld. They said they believe their sister could not have known about his ideas. One of the women said Ms Danley is “a good person” who would have stopped Paddock had she been there. Another of the sisters, who live near Brisbane, Queensland, said they believed Marilou knew Paddock had guns, but not as many as he had.

US president Donald Trump said it was a “very sad day” on Wednesday as he left for Las Vegas to pay his respects after one of the deadliest mass shootings in US history. “It’s a very, very sad day for me personally,” he said. “We’re going to pay our respects and to see the police who have done really a fantastic job in a very short time.”

On Wednesday, the city was still coming to terms with the biggest mass shooting in US history. At least 30 people remain in critical condition in Sunrise Hospital in the west of the city, with 12 people critical in the University Medical Center hospital further north.

As police continued to search for a motive for the killing, officials confirmed that 47 weapons belonging to the suspect have now been seized by police in three separate locations - the Mandalay Bay hotel suite from where Paddock launched his attack, and two homes he owned in Verde and Mesquite, Nevada.

The firearms had been purchased in Nevada, Utah, California and Texas, special agent Jane Snyder told a press conference. In addition, 12 guns found in the hotel room had been fitted with bump fire stocks - equipment which can simulate machine gun fire.

Undersheriff Kevin Mc Mahill from the Las Vegas police force said that the investigation was still “a long time from being concluded,” adding that investigators were “days away” from completing the investigation of the room where Paddock was found.

He also confirmed that Charleston Hartfield, an off-duty Las Vegas police officer who had been attending the concert with his wife, had been killed, leaving behind two children. “He ultimately gave his life protecting others,” Mr Mc Mahill said. “We are very grateful for his sacrifice.”

Earlier in the day, Mr Lombardo said that Paddock had set up cameras inside and outside his suite on the 32nd floor of the Mandalay Bay hotel to monitor anyone approaching.

Paddock had no known criminal record, and public records showed no sign of financial troubles. His brother, Eric Paddock, said he was at a loss to explain the massacre. “No affiliation, no religion, no politics. He never cared about any of that stuff,” he said outside his Florida home.

Eric Paddock said his brother did show a confrontational side at times. He apparently hated cigarette smoke so much that he carried around a cigar and blew smoke in people’s faces when they lit up around him.

As questions emerged as to how Paddock had amassed a stockpile of over 40 weapons, including automatic rifles, senior Democrats in Washington called for a committee to be established in Congress to investigate gun violence.

But Republicans showed no signs that they would consider any legislative move to restrict gun ownership, a red-line issue for many of their voters. Speaking in the Senate, majority leader Mitch McConnell evaded questions about possible legislative measures on gun control.

“The investigation has not even been completed. I think it’s premature to be discussing legislative solutions, if there are any,” he said.

Mr Trump and First Lady Melania Trump are visiting Las Vegas under tight security, following a scheduled trip to Puerto Rico on Tuesday to survey the damage from Hurricane Maria. They are expected to meet with patients and medical professionals in hospitals in the area, as well as those who helped in the rescue effort. On Tuesday, Trump referred to Paddock as “a sick man, a demented man,” and in response to renewed calls for tougher gun control measures, said, “we’ll be talking about gun laws as time goes by.”