Tillerson ‘never considered resigning’ as US secretary of state 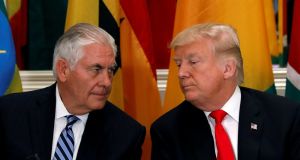 US secretary of state Rex Tillerson has denied he has considered resignation and pledged loyalty to Donald Trump in the wake of a report that he had called the president a “moron”.

“There has never been a consideration in my mind to leave. I serve at the appointment of the president and I’m here as long as the president thinks I can be useful to achieving his objectives,” Mr Tillerson said at a hastily arranged press appearance on Wednesday.

But he did not deny the report on NBC News on Wednesday morning that he had derided Trump as a “moron” in a meeting of White House national security officials and members of the cabinet.

Instead, he shrugged off the report as “petty nonsense”, and issued a stream of praise for the president.

“He loves his country. He puts America and Americans first. He’s smart. He demands results wherever he goes and he holds those around him accountable for whether they have done the job he has asked him to do,” Mr Tillerson said.

Moments after his statement, CNN also reported that he had called Mr Trump a moron and that the president had been made aware of it.

The secretary of state said he had not talked to the president on Wednesday morning before making his statement, saying Mr Trump was on his way to Las Vegas. But the president was clearly watching Mr Tillerson, tweeting within a few minutes.

“The NBCNews story has just been totally refuted by Sec Tillerson and VP Pence. It is #FakeNews. They should issue an apology to AMERICA!” he said.

The report by NBC News is the latest in a long series of snapshots of an administration in near constant crisis, largely as a result of the erratic and abrasive character of the president.

The @NBCNews story has just been totally refuted by Sec. Tillerson and @VP Pence. It is #FakeNews. They should issue an apology to AMERICA!

In its first nine months it has been dogged by resignations, gaffes, failed legislative initiatives, and scandals, to a degree unmatched by any administration in modern US history.

Mr Trump has openly disparaged his own top officials, such as the attorney general, Jeff Sessions, and repeatedly contradicted and undercut Mr Tillerson - most recently when the secretary of state was in China to explore ways of containing the North Korean nuclear crisis.

Mr Tillerson mentioned said there were channels of communication between Washington and Pyongyang.

Soon afterwards, Mr Trump went on Twitter to say the secretary of state was “wasting his time trying to negotiate with Little Rocket Man [Trump’s nickname for Kim Jong-un]”.

“Save your energy, Rex, we’ll do what has to be done!” he tweeted.

Speculation on whether Mr Tillerson would resign has swirled around Washington throughout the summer, and apparently for good reason.

Mr Tillerson was in Texas for his son’s wedding in late July, when Mr Trump addressed the Boy Scouts of America, an organisation Mr Tillerson once ran and is passionate about.

The president’s address made little allowance for the fact he was addressing an audience of teenagers and Mr Trump spent much of it scoring political points against his rivals and boasting about his election success more than eight months earlier.

Mr Tillerson threatened not to return to Washington, according to NBC citing three unnamed sources “with direct knowledge of the threats”.

The report said the defence secretary, James Mattis, and retired General John Kelly, who would later become White House chief of staff, helped talk him out of resigning for the sake of national stability.

When Mr Tillerson did return to Washington, Vice-President Mike Pence is reported to have arranged a meeting with him to counsel him on how to get on with Mr Trump.

Mr Tillerson’s spokesman, RC Hammond, denied the reports, saying he did not consider quitting over the summer and did not call the president a moron. He told NBC he was unaware of the secretary of state’s meeting with the vice-president.

Mr Pence insisted on Wednesday he never discussed the prospect of Mr Tillerson resigning with him.

“The vice president can also confirm that, as the secretary of state made clear, at no time did he and the secretary ever discuss the prospect of the secretary’s resignation from the administration,” Mr Pence’s office said in a statement posted on Twitter by NBC News.

1 No obvious signs of injury on remains of McGinley children
2 Fine Gael to stress economic warnings as campaign enters crucial week
3 Plenty of politicians’ promises, but what about these ideas to help consumers?
4 Indian independence commemoration to remember former Cork mayor
5 Patient advocate on HSE board resigns in protest at ‘tokenistic’ treatment
Real news has value SUBSCRIBE