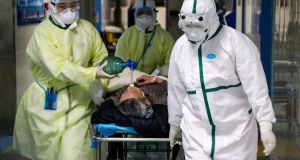 Medical workers transfer a patient in the isolation ward at a hospital in Wuhan in central China’s Hubei province. Photograph: Chinatopix via AP

The number of deaths in China’s central Hubei province from a coronavirus outbreak had risen by 81 to 780 as of Saturday, the province’s health commission said in a statement on its website on Sunday morning.

A further 2,147 cases have been detected in Hubei, the epicentre of the outbreak, taking the total in the province to 27,100.

Earlier it was reported that a 60-year-old American died of the virus, the first confirmed non-Chinese death of the illness, US officials said, as millions of Chinese began returning home after a Lunar New Year break that was extended to try to contain the outbreak.

While the vast majority of cases have been in China, the virus has spread to some two dozen countries abroad, including five British nationals infected in a French mountain resort.

The American man died on Thursday in Wuhan, the epicentre of the virus outbreak in the central Chinese province of Hubei, a US embassy spokesman said in Beijing on Saturday. He did not elaborate.

A Japanese man in his 60s and hospitalised with pneumonia in Wuhan also died after suffering symptoms consistent with the new coronavirus, Japan’s foreign ministry said.

The virus has been a blow to China’s already-slowing economy, with Goldman Sachs cutting its first-quarter GDP growth target to 4 per cent from 5.6 per cent previously and saying a deeper hit is possible.

“It’s certainly not going to be a return to normal next week,” said Julian Evans-Pritchard, senior China economist at Capital Economics in Singapore.

Most of the deaths in China have occurred in and around Wuhan. Across mainland China, the number of cases stood at 36,693 on Saturday, the World Health Organisation (WHO) said.

The virus has spread to 27 countries and regions, according to a Reuters count based on official reports, infecting more than 330 people. Two deaths have been reported outside mainland China – in Hong Kong and the Philippines. Both victims were Chinese nationals.

A WHO-led international team investigating the outbreak will leave for China on Monday or Tuesday. WHO expert Mike Ryan said the number of new cases in Hubei had stabilised over the last four days, “which may reflect the impact of control measures put in place”.

The latest patients include five British nationals staying in the same chalet at a ski village in Haute-Savoie in the Alps, health officials said, raising fears of further infections at a busy period in the ski season.

The five, including a child, had been lodged in the same chalet with a person who had been in Singapore. They were not in a serious condition, the officials said.

France issued a new travel advisory for its citizens, saying it did not recommend travelling to China unless there was an “imperative” reason. Italy asked children travelling from China to stay away from school for two weeks voluntarily.

China’s Communist Party rulers have sealed off cities, cancelled flights and closed factories, a response that has dented the world’s second-biggest economy and had ripple effects globally for financial markets and businesses dependent on China.

China’s economy will sputter towards normal on Monday, as millions return to the big cities after the biggest holiday of the year. The holiday was extended, but many workplaces will remain closed and many white-collar workers will continue to work from home.

US electric carmaker Tesla’s factory in Shanghai will resume production on Monday, a government official said on Saturday.

Apple Inc said it was working to reopen its China corporate offices and call centres and was making preparations to reopen retail stores there.

But Chinese authorities have blocked a plan by Apple supplier Foxconn to resume production from February 10th over concerns about the spread of the virus, Japan’s Nikkei business daily reported on Saturday.

Volkswagen, facing supply chain disruptions, said it had postponed restarting production at most China plants in its joint venture with SAIC Motor and the Tianjin plant in its JV with FAW Group until February 17th.

News of the death on Friday of Li Wenliang, a doctor who was reprimanded by police for raising the alarm about the new coronavirus, sparked outrage on Chinese social media and rekindled memories of how Beijing was slow to tell the world about the Sars outbreak.

Chinese-ruled Hong Kong introduced a two-week quarantine on Saturday for all people arriving from the mainland, or who have been there during the previous 14 days.

The Pentagon is shrinking the size of its delegation travelling to the Singapore Airshow 2020 and US defence firms Lockheed Martin Corp and Raytheon Co said they would not attend. Singapore has 40 coronavirus infections.

Another three people on a cruise liner off Japan tested positive for coronavirus, bringing the total number of confirmed cases from the ship to 64, Japan’s health ministry said.

Royal Caribbean Cruises Ltd on Friday banned “any guests holding Chinese, Hong Kong or Macau passports, regardless of when they were there last” from boarding the company’s ships.

The WHO warned on Friday against the “unnecessary, unhelpful profiling of individuals based on ethnicity”. – Reuters/Bloomberg