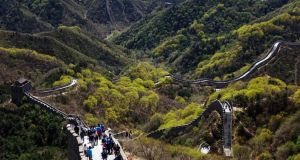 Tourists walk along the Great Wall of China. Adverse natural conditions and reckless human activities – including stealing the bricks to build houses – are doing more damage to China’s most famous landmark than the Mongol hordes ever did.File photograph: Johannes Eisele/AFP/Getty Images

Nearly one-third of the most commonly accessed section of the Great Wall of China, the longest wall in the world, has disappeared and drastic measures have been urged for its preservation.

Adverse natural conditions and reckless human activities – including stealing the bricks to build houses – are doing more damage to China’s most famous landmark than the Mongol hordes ever did.

For many years, the wall – which has been on Unesco’s list of World Cultural Heritage sites since 1987 – was believed to be the only man-made structure visible from space.

These days, China’s national symbol is so dilapidated in places that estimates of its total length vary from 9,000 to 21,000km, depending on whether missing sections are included and despite a raft of rules to protect it.

Construction of the wall first began in the 3rd century BC, but nearly 6,300km were built in the Ming Dynasty of 1368-1644, including the much-visited parts north of the capital, Beijing.

Of that section, 1,962km has disappeared over the centuries, the Beijing Times reported.

“We can check every reported case, but when the people who enforce the law came, it has been already destroyed. Also, great protection lacks of people and money to maintain it,” Huang Yaohui, vice-deputy of the Great Wall Association, told local media.

Under Chinese regulations, people who take bricks from the Great Wall can be fined up to 5,000 yuan (€728).

Despite its military standing, the Great Wall was never actually used to withstand an attack – it was weakness and corruption within the imperial government, rather than the wall itself, that led to invaders being able to pass it to get to Beijing.

Legend has it that Genghis Khan bribed his way past the guards to enter the country.

Over the years, some fines have been meted out for transgressions, such as builders being punished for digging up part of the wall to use as landfill in a local construction project.

During the second World War, Japanese invaders bombed parts of the wall, while defending Chinese armies were also forced to knock down sections of the wall to build barricades at other points along the route of the invading army.

The wall was first built during the Qin Dynasty (221-206 BC), one of the biggest feats of engineering the world had ever seen, involving hundreds of thousands of workers, including soldiers and prisoners. The workers were often attacked by roaming gangs of brigands.

Legend also has it that when the workers died their bodies were put into the foundations and it became known as the “longest graveyard in the world”, although it’s unlikely this actually took place.

The demise of the Ming Dynasty reduced the wall’s importance. The new Manchu rulers hailed from north of the structure, and were one of the tribes it was originally conceived to keep out.

In 1644, the Manchus convinced general Wu Sangui to open the gates of the wall at the Shanhai Pass and allow them through – legend has it, it took three days for their army to cross.

Zhao Ou’ren, an expert at Tsinghua University, said to protect an ancient structure such as the wall is labour intensive and not always profitable, and so it would be difficult to get attention and support from the local government.

“However, the Great Wall is the label of China. To protect it, we can’t have any utilitarian kind of thinking,” he said.