Typhoon Mangkhut left a trail of damage after making landfall in the northern Philippines. Video: CCTV 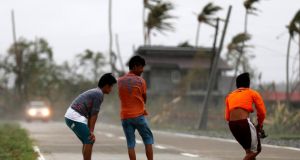 Typhoon Mangkhut, which meteorologists called the most powerful storm in the world this year, has swept through the northern end of the Philippine island of Luzon, leaving at least 16 people dead and wreaking havoc. It uprooted trees, ripped off roofs, set off landslides and flooded farms and roads.

Yet amid the suffering, there was also relief that the situation was not much worse. The initial casualty toll was far lower than officials had feared in the days before the storm made landfall early Saturday on the Philippines’ largest and most populous island.

It could be days or weeks before the storm’s true human toll is known. It will also take time to assess how much damage was done to the country’s prime agricultural region and to the economy. Damage to farms could be extensive and costly for the nation. The region is the country’s largest food producer, and the destruction of crops could lead to food shortages, higher costs and inflation.

From the road above Robert Tumaneng’s fish ponds on Saturday, the floodwaters extended as far as the eye could see, with the tips of palm trees and the thatched roofs of wooden shacks barely visible beneath the caramel-coloured water. “It was shaking like an earthquake,” said Tumaneng (55), a fish farmer in the town of Claveria on Luzon’s north coast. “This storm was different because the wind was low to the ground like it was crawling and destroying everything,” he said after the storm hit.

The number of confirmed fatalities is almost certain to rise as people begin assessing damage from the typhoon. But if the numbers are limited, it will be, at least in part, a testament to the preparedness of authorities following disastrous storms in recent years.

Determined not to see a repeat of Typhoon Haiyan, which killed more than 6,000 people in the central Philippines in 2013, officials had evacuated more than 105,000 people to temporary shelters before Typhoon Mangkhut hit. Communications in the disaster zone were hampered by power and cell service outages, and access was difficult in many places because of flooding and road closures, making it hard to evaluate the storm’s full effect.

Trees and coconuts were strewn across the roads, which were deserted except for volunteer crews removing debris and the occasional emergency vehicle. In one community after another, emergency workers reported downed trees and badly damaged buildings. Signs, tin roofs and gates that had been torn free flew about.

“At this stage, it is still too early to understand the full impact of the typhoon,” said Gina Maramag, spokeswoman in the Philippines for the United Nations Office for the Coordination of Humanitarian Affairs. “Early indications suggest that the prompt evacuations made by local authorities have mitigated the impact on civilians.”

Among the casualties was a family of four killed when a landslide struck their home in the Cordillera Mountains, south of Claveria, according to a top government official, Francis Tolentino. He spoke in a television interview from the disaster zone on Saturday evening.

A CARE Philippines Emergency Response Team that reached the town of Aparri on the north coast reported that some structures were damaged by the storm, including an evacuation centre. But much of the surrounding area had yet to be assessed. “The northernmost towns of Cagayan are believed to be badly hit and it is still difficult to access these areas as of the moment,” said Madel Montejo, a member of that emergency response team. “The people say they need food, water, dry clothes and shelter repair materials.”

The typhoon, with wind speeds reaching 170 mph before reaching land, could have caused far more damage if it had hit Luzon farther south and closer to Manila, a city of more than 12 million people. The capital was hit by heavy rain and strong winds, with trees uprooted and flooding in some areas.

More than 1,600 families were evacuated after the Marikina River, which runs through part of the city, began rising quickly because of runoff from nearby mountains. Police said the body of a child, about 10 years old, was found floating in the river.

The area of Luzon that the typhoon hit hardest is primarily agricultural and, with more than 4 million people, is less densely populated than other parts of the country. “The country has learned a lot from the Haiyan tragedy, which explains more effective mandatory evacuation and coping measures in place,” said Richard Heydarian, a political analyst in Manila. “But the economic costs could be severe.”

Leaving the Philippines behind on Saturday evening, Typhoon Mangkhut took aim at Hong Kong and southern China, where it was expected make landfall on Sunday. While winds had weakened, forecasts indicated it would still pack the power of a Category 2 storm when it came ashore, possibly near Maoming, a big petrochemicals centre. The area forecast to be affected has relatively few low-lying towns that would be vulnerable to the rising sea levels of a storm surge, and Guangdong, China’s most populous province, has extensive experience with typhoons and is well prepared.

If Mangkhut shifts slightly to the north, though, it could hit Hong Kong and the Pearl River Delta area, one of the world’s most important manufacturing hubs and home to more than 60 million people. Hong Kong itself is quite resilient to typhoons and although heavy rain could trigger landslides, the former British colony is not especially vulnerable to flooding, with few low-lying areas. The sprawling river delta around it, however, is barely above sea level and has struggled with flooding despite years of investment in drainage systems. – New York Times