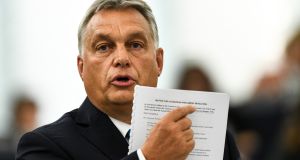 Hungary’s Viktor Orbán suffered a stinging rebuke from his European political allies on Wednesday when the EU’s parliament voted for the first time to censure his country over possible breaches of bloc rules and values.

Almost 450 MEPs lined up against Budapest, including many members of the right-wing European People’s Party with which the Hungarian premier’s Fidesz is affiliated, deepening the rift in the EU over the alleged slide towards autocracy in some member states.

German chancellor Angela Merkel and European Commission president Jean-Claude Juncker also weighed in on Wednesday, warning against growing nationalism and a deterioration in the rule of law that some see as an existential threat to the EU.

Heather Grabbe, director of the Open Society European Policy Institute, said MEPs across the political spectrum had taken a “historic stand in defending the EU’s democratic values and the rights of its citizens”.

George Soros, the Open Society institute’s founder, has been a target of Mr Orbán’s government as it has tightened control since his return to power in 2010.

MEPs voted by 448 to 197 to back a report to the parliament, written by a Dutch Green MEP, that accused Hungary of threatening the rule of law by hampering press and academic freedoms, cracking down on NGO funding and denying rights to minorities and migrants.

The ballot cleared the two-thirds majority needed to trigger further action against Hungary, meaning that it was supported by a significant number of MEPs from the European People’s Party – the largest group in the parliament.

In a sign of the changing political climate, Manfred Weber, the German head of the EPP group, said before the vote that he would back action against Hungary. Mr Weber has previously been cordial towards Mr Orbán, congratulating the Hungarian premier publicly in April for his landslide re-election win.

Mr Orbán is facing a separate but related battle with some EPP members who want to expel him from the group.

Zsuzsanna Vegh, an associate researcher at the European Council on Foreign Relations think tank, said the parliament vote would not end “democratic backsliding” in Hungary – but it was a watershed moment because of the rift it opened within European conservative politics.

“However he tries to frame it in practical terms, the loss of the vote and the fact that he lost the backing of EPP, allies with whom he has been negotiating and working and who have been protecting him for the last eight years, is a failure for the prime minister and his strategy,” Ms Vegh said.

Earlier on Wednesday, Mr Juncker used his annual State of the Union address to warn that the commission would “resist any attack on the rule of law” and was “very concerned by developments in some of our member states”.

In a separate speech, Ms Merkel attacked nationalism and said European elections next May would turn on how Europe handled stark divisions in areas such as migration – opposition to which is a crucial plank of Mr Orbán’s appeal. “It’s very clear – if Europe simply says that we’ll isolate ourselves, and we don’t deal with the things that happen in our region, then that’s going to end badly,” Ms Merkel said.

The European Parliament’s decision shoves Hungary into the same so-called Article 7 action launched in December by the commission against Poland, under which fellow EU states probe whether the accused countries risk breaching bloc rules and values. The process could theoretically end with punishments including suspension of Budapest’s EU voting rights – but that would only happen in the unlikely event the other 27 nations agreed.

Member states’ European affairs ministers are due to hold another hearing next week in connection with the drawn-out Article 7 complaint the commission launched against Poland in December. Hungary has already said it would block any possible sanctions – highlighting how states under scrutiny can neuter the process by covering for each other. – Copyright The Financial Times Limited 2018