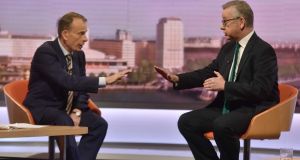 Theresa May’s ministers have moved to dampen a Conservative backbench revolt against a plan agreed at Chequers last Friday that would keep Britain closely aligned with the European Union after Brexit. Hardline Brexiteers have condemned the proposal as a betrayal of the 2016 referendum vote, but environment secretary Michael Gove, who chaired the Vote Leave campaign, urged MPs to unite behind the prime minister.

“Those of us who believe that we want to execute a proper Brexit, and one that is the best deal for Britain, have an opportunity now to get behind the prime minister in order to negotiate that deal,” he told the BBC’s Andrew Marr.

The plan approved by the cabinet after an all-day meeting on Friday would see Britain maintaining full regulatory alignment with the EU for goods, including agri-foods. Parliament could decide to reject new EU regulations after Brexit, but the document acknowledges that such a move would “lead to consequences” for market access, security co-operation or the frictionless border.

Conservative MP Andrew Bridgen accused Brexiteer ministers of failing to stand up for their principles, accusing foreign secretary Boris Johnson, whose hero is Winston Churchill, of following the example of Neville Chamberlain.

“I’m very, very disappointed with the offer that we’ve seen coming out of Chequers. I’m disappointed that so-called Brexiters in the cabinet didn’t pick up the cudgels and fight for a better offer,” Mr Bridgen told the BBC.

Backbench Brexiteers will have an opportunity to express their outrage directly to the prime minister when she addresses the 1922 Committee at Westminster on Monday. Mr Gove, whose intervention at Chequers in support of the prime minister was reported to have swayed other ministers, said the proposal was the best available option.

“We achieved all of the things that we campaigned for in order to ensure we could leave the EU, but we also do so in a way which respects some of the wishes and some of the concerns of some of my colleagues that voted remain.”

Shadow Brexit secretary Keir Starmer said Labour would not support the plan agreed at Chequers, describing it as an unworkable fudge and a bureaucratic nightmare.

“She hasn’t met our demands. We’ve been clear you need a comprehensive customs union and you need a single market deal with shared institutions and shared regulations. She’s come up with a fudge on customs. It is a fudge and it’s going to unravel. She’s going to have to think again,” he said.

“We’ve argued for a comprehensive customs union with the EU. In order to avoid that, the prime minister has gone to these extraordinary lengths to come up with this bureaucratic nightmare which is not going to work.”