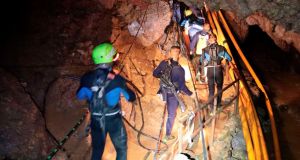 The parents of 12 boys stranded inside a northern Thailand cave have written to their children for the first time and to the coach who led them inside, telling him: “Please don’t blame yourself.” “To all the kids,” one letter, written by the mother of Nattawut Takamsai (14) said.

“We are not mad at you at all. Do take good care of yourself. Don’t forget to cover yourself with blanket as the weather is cold. We’re worried. You will come out soon.” She wrote to Ekkapol Chantawong, the coach: “We want you to know that no parents are angry with you at all, so don’t you worry about that.”

The notes were delivered by Thai navy Seals who picked up letters written in return by the boys to their parents . Chanin Wiboonrungrueng (12) told his mother and father not to worry. “I’m fine,” he wrote. “Please tell Yod to take me out to a fried chicken shop.”

The release of the handwritten notes illustrated the stakes of a race against time that has captivated Thailand and the world since last Monday, when the boys were discovered sheltering on a muddy ledge two miles (3.2km) inside the cave.

The letters expressed hopes Thai authorities would soon find a way to free the boys before the arrival of monsoon rains that could seal the group inside the cave until as late as January, authorities said on Saturday. “I’m fine but it’s a little bit cold,” said a letter from Duangpetch Promthep (13). “Don’t worry and don’t forget my birthday.”

Four of 12 schoolboys have been rescued so far after divers launched a daring and dangerous mission to free the children and their coach, who have trapped underground for more than two weeks.

The operation to rescue the boys has been blessed by unseasonably dry weather in Mae Sai, which had allowed authorities to attempt their ideal escape plan: draining the cave enough to allow the boys to walk out. But draining was taking longer than expected – water levels are dropping about 1cm an hour – and authorities estimated they had at most four days until torrential rain flooded the cave complex again.

“[The next] three to four days from now is the most favourable time for the operation and rescue mission using one of the action plans,” Narongsak Osatanakorn, governor of Chiang Rai province, told a press conference at the cave site on the eve of Sunday’s rescue attempt. “If we wait too long, we don’t know how much rainwater will come.”

It has been a gruelling week for Thai navy officers, rescue workers and volunteers at the crowded cave site about 15 minutes’ drive from the Myanmar border. Divers have said they are sometimes spending nine hours inside the cave laying cables or clearing obstacles. A former Thai navy Seal, Saman Kunan (38) died deep inside the tunnel on Thursday morning after running out of air.

The discovery of the boys on a muddy ledge on Monday night sparked elation across Thailand. But the mood turned to anxiety with the recognition that this is one of the most challenging operations Thai navy Seals have ever undertaken. “It’s a hell of a job,” Rear Adm Arpakorn Yookongkaew, the Thai navy Seal commander, said last week. “On that night [they were found] we were happy for a few seconds,” Mr Osatanakorn said on Saturday. “And then after that we stressed because we had another battle.”

In a small command centre up the hill from cave, officials led by Mr Osatanakorn spent the week refining escape plans based on weather forecasts and information from divers inside the cave. “[We] test and test and test to ensure that it goes as planned,” he said. “Everyone is stressed, every official has shouldered a big burden.”

The families of the boys have also spent every day at the site, sitting inside the park headquarters following developments on television, occasionally wandering to a mental health tent to speak with nurses and clerics. “Titan, I’m waiting for you in front of the cave,” Wiboonrungrueng’s mother wrote to him this week. “I’m missing you very much. You must be patient and keep fighting. You can do it and I believe you can do it.”