Diplomatic efforts continue against a backdrop of warlike rhetoric 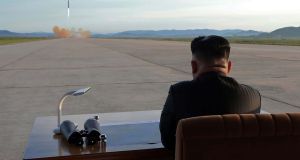 Tensions are running extremely high in the region since North Korea test-fired a new intercontinental ballistic missile (ICBM) which it claims can reach anywhere in the US. Shortly thereafter, the US and South Korea staged their biggest ever airborne joint drills, with two dozen stealth fighters and B-1B Lancer bombers flying over the peninsula.

“Right now, our military faces a very serious situation where North Korea’s nuclear and missile threats are fast becoming more real and advanced,” the president said at a meeting with 150 military commanders in Seoul.

“First, we must realise superiority over North Korea based on overwhelming power to ensure our own peace and security,” said Mr Moon, a former special forces soldier.

“Securing a strong deterrence against North Korea is a way of expressing our firm determination that we will not allow North Korean provocations or another war on the Korean Peninsula,” the president said, speaking in the Blue House presidential building.

While the public rhetoric has remained extremely aggressive, with North Korea saying that war was an “established fact” and US president Donald Trump adopting a hardline approach, there has been frantic diplomatic activity behind the scenes from various actors in the crisis.

North Korean leader Kim Jong-un’s remark after the successful launch that the country had “completed the great historic cause of creating a state nuclear force” is being read as a sign that no more testing was imminent and as way forward to opening up to dialogue.

In Pyongyang, UN political affairs chief Jeffrey Feltman was “enthusiastically” received by North Korea’s foreign minister Ri Yong-ho at the Mansudae assembly hall, the state news agency KCNA reported. While the visit is expected to discuss issues of “mutual interest and concern”, the nuclear crisis was likely to dominate the talks. The KCNA report was low on detail, simply saying the two had a “talk”.

Russian foreign minister Sergei Lavrov said this week that North Korea was ready for direct talks about the nuclear stand-off.

Lee Hae-chan, a former South Korean prime minister and leading member of the ruling Democratic Party, who has previously served as a special envoy to China, said Mr Moon and China’s President Xi Jinping both believed in the “freeze for freeze” approach.

This would involve North Korea ceasing nuclear tests at the same time as the US and South Korea stop joint military drills.

“I can say that they [Mr Moon and Mr Xi] have come to a point where they share an understanding that it is perhaps the most realistic way,” he told a security conference.

Mr Moon has been eager to present a unified front with Mr Trump, but he has also cultivated his links to China, which is a strong advocate of dialogue.

During their meetings the two leaders had also discussed the idea of seeking the North’s denuclearisation and a Korean War peace treaty at the same time. – Additional reporting: agencies