A man rescued a wild rabbit from the raging wildfires on the side of a California highway on December 6. An eyewitness said that the man "just pulled to the side of the road and jumped out" to rescue the rabbit. 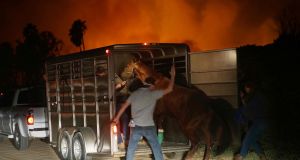 Volunteers rescue horses at a stable during the ‘Lilac fire’ in Bonsall, California, on Thursday. Photograph: Sandy Huffaker/AFP/Getty Images

Firefighters on Friday battled an expanding front of southern California wildfires that have raged for five days and destroyed at least 500 structures, with the gusty winds expected to drive the conflagrations into the weekend.

Almost 200,000 Californians have been chased from their homes as more than 5,700 firefighters battled six large wind-stoked fires and several smaller ones that erupted since Monday. The blazes stretch from the San Diego area up the Pacific Coast to Santa Barbara County, putting billions of dollars of property at risk.

The US National Weather Service on Friday forecast that conditions would continue to aid the spread of wildfires, with peak wind gusts up to 80km per hour through Sunday from the dry Santa Ana winds blowing westward from the California desert.

The California Department of Forestry and Fire Protection (Cal Fire) warned that wind and weather conditions would increase risks from the Los Padres National Forest north of Santa Barbara down the Pacific coast to the Mexican border.

Firefighters and helicopters dumped water and fire retardant on the inferno that hopscotched over highways and railroad tracks and torched rows of houses.

About 190,000 people were forced to evacuate, Cal Fire said.

Some 86,000 homes could be destroyed in the three large fires in Ventura and Los Angeles counties, according to CoreLogic a New Jersey-based risk analysis firm, with reconstruction possibly totalling $27.7 billion (€23.5 billion).

The Los Angeles Unified School District, the US’s second largest with more than 640,000 students, closed more than one-quarter of its nearly 1,100 schools for a second day on Friday. The University of California Santa Barbara canceled classes as well.

The largest of the blazes, known as the Thomas Fire, has charred 53,418 hectares (132,000 acres) and destroyed 439 structures northwest of Los Angeles, officials said. More than 2,600 firefighters from as far away as Portland, Oregon, and Nevada, have made progress against the blaze with 10 percent contained.

Cal Fire spokesman David Clark said personnel were concentrating around the towns of Ojai, which had flames on three sides, and Santa Paula.

The blaze destroyed 20 structures and prompted evacuations and road closures.

The Skirball Fire, which started on Wednesday, has reached into the wealthy enclave of Bel-Air on Los Angeles’ West Side. Some major highways in the densely populated area were intermittently closed.

In the seaside enclave of Faria Beach, caught between burning mountains and the Pacific Ocean northwest of Ventura, fires spread down the smoking hills.

Heavy smoke made breathing hazardous in some areas, and residents were urged to stay indoors. Ventura County authorities said air pollution measures in the Ojai Valley were “off the charts.”

The Los Angeles Police Department tweeted a photo of a police officer in a respirator rescuing a cat. The Los Angeles County animal shelter said it was hosting 184 pets including llamas, donkeys and horses while reports said 29 horses were burned to death on Tuesday at a ranch in the Sylmar neighbourhood of Los Angeles. – Reuters