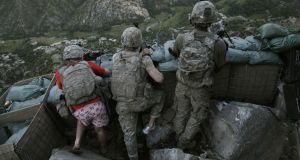 America’s top general has said military intelligence agencies are working to corroborate reports of Russia paying Taliban fighters bounties for killing US soldiers and vowed a response if they were confirmed.

Gen Mark Milley, the chairman of the joint chiefs of staff, told the House armed services committee, that the Pentagon was committed to discovering whether Russian military intelligence had paid for attacks on American soldiers in Afghanistan.

“We’re going to get to the bottom of this bounty thing. If in fact there are bounties, I’m an outraged general, just like every one of us in uniform is,” Gen Milley said. “That’s a real big deal. We don’t have that level of fidelity yet, but we’re still looking.”

He suggested that the US may not be responding to the reports as robustly as necessary in non-military ways.

“The issue is at the strategic level,” he said. “Is there diplomatic, and informational and economic ? sanctions, are there demarches, are there phone calls, is there pressure, those sorts of things. And I can tell you that some of that is done. Are we doing as much as we could or should? Perhaps not, not only to the Russians but to others.”

The defence secretary, Mark Esper, who was testifying alongside Gen Milley, said that the original reports did not come from any of the nine of the 17 US intelligence agencies under the Pentagon’s authority, implying the information leaked to the press in recent weeks came from the CIA or another civilian agency.

Mr Esper said the reports were first reviewed by the Pentagon in January, when they were shown to Gen Milley and the head of US central command, Gen Kenneth McKenzie, and the defence secretary became aware of them in February.

“They got some initial reporting on the ground that they began pursuing. Neither thought the reports were credible, as they dug into them,” Mr Esper said.

Gen Milley stressed that the investigation was not over.

“I and the secretary and others are taking it seriously,” the general said. “We’re going to get to the bottom of it. When I find out if, in fact, it’s true. And if it is true, we will take action.”

Donald Trump has insisted he was not briefed on the Russian bounties. It has been reported that the suspicions were summarised in written form as part of the president’s daily brief, but the national security adviser, Robert O’Brien, has said it was the decision of the CIA briefer not to present them verbally.

Intelligence officials are reported to have been reticent in passing on negative information about Russian activities to Mr Trump because of his angry reaction. So far, the Trump administration has not announced any retaliatory action.

At the same congressional hearing, Gen Milley made strong remarks on the impact of having 10 army bases in the US named after Confederate military leaders, whom he described as traitors.

Mr Trump has said he would not even consider renaming the bases, but Gen Milley said the symbolism of the names represented a challenge to the cohesion of the US armed forces, which are 43 per cent minority. He added that the US army was 20 per cent African American, rising to 30 per cent at some bases.

He recalled having a staff sergeant at Fort Bragg who told him he had to go to work every day at a base named after a man, Confederate Gen Braxton Bragg, who had enslaved his grandparents.