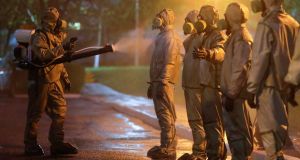 Staff at Belarus’s ministry of defence spray disinfectant on each other after disinfecting a hospital in Minsk on Tuesday. Photograph: Sergei Grits/AP

Belarusian president Alexander Lukashenko has invited foreign leaders to join him for a major military parade and other events to mark the end of the second World War, which he says must go ahead in defiance of the coronavirus pandemic.

A former collective farm boss who has run Belarus since 1994, the authoritarian Mr Lukashenko insists none of his people have died or will die solely due to Covid-19, and he has recommended sport, farming, the sauna and vodka as ways of warding off the virus.

The Belarusian health ministry said on Wednesday that 19,255 people in the country of 9.5 million had tested positive for Covid-19, and “112 patients with a range of chronic illnesses [and] with the identified coronavirus infection have died.”

Mr Lukashenko has ignored calls from the World Health Organisation to introduce physical distancing measures and cancel mass public events, and he says his people’s common sense and strong centralised health system have helped control the outbreak while keeping the economy working.

“I publicly invite heads of state, at least from the former Soviet Union, to come to Minsk and be at the parade,” he said of plans for Saturday’s Victory Day national holiday to mark 75 years since the defeat of Nazi Germany.

“This republic, which was wiped off the face of the earth . . . was the republic that suffered most. It is a living monument to that brutal war. It was right to meet here, and even more so now.”

Mr Lukashenko predicted that leaders would decline his invitation so as not to undermine the strict health controls they had introduced, and which he has dismissed as ineffective and disproportionately damaging to the economy.

“They even imposed quarantine, curfew and so on,” he said in explaining their probable absence, while insisting that “there will be enough ordinary people from all the [ex-Soviet] republics at the parade”.

Russia and other countries in the region have postponed or dramatically scaled back plans for Victory Day, and Mr Lukashenko suggested the parade of thousands of soldiers and military hardware in Minsk could be broadcast on Russian television.

Thousands of Belarusians are expected to come out to watch the parade and other events in Minsk over the weekend, including concerts and a firework display. Smaller public celebrations are scheduled across the country.

Mr Lukashenko said the military parade must go ahead to honour the more than 2 million people that Soviet Belarus lost during in the war.

“We should remember that those people may have died from viruses and other illnesses . . . And they died for us, no matter how pompous that might sound,” he said of his reasons for not cancelling the event.

“And think what people would say. Maybe not straight away but in a day or two – they would say that we were scared.”