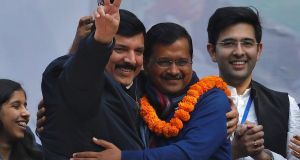 This number was just four seats short of the 67 that AAP won in 2015, and jubilant supporters in their distinctive white boat-shaped caps beat drums and danced in Delhi’s streets to celebrate their triumph.

The BJP ran a vitriolic campaign in which several of its ministers and MPs were banned from electioneering because of provocative speeches. The BJP was poised to win just seven assembly seats, four more than its 2015 tally.

In its campaign the AAP had concentrated on its achievements over the past five years in upgrading run-down government schools and neighbourhood clinics and providing free water and electricity to the poor in the city-state.

It also provided free city travel in Delhi to all females on public buses and the local metro, in addition to subsiding travel for tens of thousands of residents to popular pilgrimage spots across India.

Many political analysts said that the BJP ran a venomous campaign in which it attempted to discredit AAP leaders, and highlighted Mr Modi’s exaggerated achievements at rallies and neighbourhood meetings.

It ignored local issues like Delhi’s air pollution, which is among the world’s worst, water scarcities and rubbish disposal problems, among numerous other city shortcomings.

“The Delhi campaign was one of the most hateful ever in independent India’s history,” said Seema Mustafa of the Centre for Policy Analysis in Delhi. The BJP attempted to divide society in order to seek votes but its efforts were neutralised by the AAP, he added.

Sensing defeat in the run-up to voting, the BJP party that won the 2014 and 2019 general elections, including all seven Delhi parliamentary seats both times, fielded 240 of its 303 MPs to woo Delhi’s 14.6 million eligible voters.

Even though Delhi is not a state, forming the government there is a matter of political prestige for all parties as the entire country’s attention is focused on the electoral outcome in the city.

In its campaigning the BJP dubbed Mr Kejriwal a “terrorist’ and criticised peaceful protesters demonstrating in the city against the federal government’s controversial Citizenship Amendment Act (CAA).

The demonstrators, mostly women, claim the Act invalidated India’s constitution and secularity by basing the right to citizenship on religion.

The CAA offers Indian citizenship to six religious monitories like Hindus, Sikhs and Christians from the neighbouring Islamic countries of Afghanistan, Bangladesh and Pakistan.

It omits Muslims, who constitute around 20 per cent of India’s population of more than 1.3 billion.

Similar protests have taken place across India since early December. At least 25 people have died in clashes with police.