Modi sworn in for second term as India’s prime minister 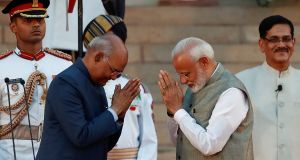 Narendra Modi was sworn in on Thursday for a second consecutive five-year term as India’s prime minister at a grand ceremony in New Delhi attended by more than 8,000 people.

President Ram Nath Kovind administered the oath of office to Mr Modi, the 68-year-old son of a low-caste tea vendor, at the glittering event in the forecourt of the colonial-era sandstone presidential palace, surrounded by MPs, leaders of neighbouring countries, diplomats, businessmen, religious leaders and Bollywood stars, amongst others.

Pakistan, with whom India came close to war in February and with whom security and diplomatic relations remain strained over alleged cross-border terrorism was, unlike in 2014, not invited to Mr Modi’s swearing-in.

Mr Modi, who fought a gruelling and pugnacious election after adroitly converting it into a presidential-style campaign, heads the Hindu nationalist Bharatiya Janata Party (BJP) government and is now set to be in power until 2024.

Almost singlehandedly, he managed to secure a massive mandate for the BJP in the general elections that ended earlier this month by focusing largely on Hindu nationalism and national security, and roundly abusing all his opponents.

Consequently, the BJP, which won about 48 per cent of the vote, now controls 303 of the 545 seats in the Lok Sabha or lower house of parliament, 31 seats more than those needed for a majority government.

“Our government will leave no stone unturned to safeguard India’s unity and integrity. National security is our priority,” Mr Modi said just before his swearing-in ceremony, after visiting a war memorial near parliament that his government had recently inaugurated.

“India is proud of all those brave men and women martyred in the line of duty,” the prime minister added in a rerun of his election speeches.

A yoga practitioner, strict vegetarian and workaholic, Mr Modi lives alone and is known to keep his own counsel, confining himself to just a handful of trusted aides. He separated from his wife not long after a marriage arranged by his parents, when they were teenagers in the 1960s, and publicly acknowledges his spouse – a 67-year-old retired schoolteacher named Jashodaben – only when filing his election papers.

Alongside Mr Modi, 58 ministers including 24 senior cabinet members, were also sworn in amidst tight security in which thousands of police and paramilitary commandoes, snipers and drones were deployed around the presidential palace and surrounding areas.

This included the indomitable BJP chief Amit Shah who is Mr Modi’s closest comrade and the person behind his party’s electoral triumphs. Widely feared for his brusqueness and bluntness, Mr Shah is the second most powerful person in government after the prime minister and is being widely tipped in BJP circles as Mr Modi’s successor.

Meanwhile, India’s principal opposition Congress Party, which has ruled independent India for almost 50 of its 72 years since independence, is struggling to stay relevant after being mauled in two back-to-back general elections.

It won only 52 seats this year, just eight more than it secured in 2014, leaving it two MPs short of qualifying it as the official Opposition in parliament.

Congress Party head Rahul Gandhi, who lost his family seat in north India to the BJP but was elected from a safe constituency in southern Kerala state, has offered to resign. Party loyalists, however, are opposed to Mr Gandhi’s stepping down.

The party says it will refrain from fielding its spokespersons for television debates for the next month while it analyses its latest defeat and reworks a road map for its future.