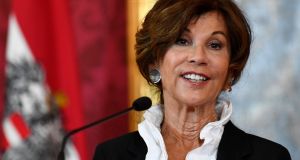 Austria has its first woman chancellor after Brigitte Bierlein, its constitutional court president, agreed to serve as caretaker leader until September’s snap election.

Ms Bierlein will head a technocrat government and replaces Sebastian Kurz, leader of the conservative People’s Party (ÖVP). His government lost a confidence vote in parliament this week after losing its junior partner, the far-right People’s Party.

The judge’s appointment is the latest twist in a drama that began two weeks ago when secret videos were released showing FPÖ leader Heinz-Christian Strache appearing to promise state contracts in exchange for secret campaign donations.

In the videos Mr Strache can be heard encouraging a woman posing as a Russian oligarch’s niece to buy a controlling stake in Austria’s most influential tabloid to secure positive coverage.

Mr Strache resigned, an FPÖ cabinet walkout followed, and the party backed an opposition heave against the minority Kurz administration.

On Thursday president Alexander Van der Bellen announced the appointment  of the 69-year-old, viewed as a moderate conservative with no open political affiliations. After senior court positions she has been president of the Austrian Constitutional Court since 2003 and her term is due to expire next year.

Ms Bierlein said she was “surprised” to have been approached for the job but decided to take the plunge without much hesitation.

“Judges are not normally stuck for words but, I admit, this time it was different for me,” she said, in brief remarks at Vienna’s Hofburg palace. She promised to “gain the trust” of the country’s main political parties “and the confidence of Austrians”, and told the president she would “do everything within my power to earn the trust that you have put in me”.

Mr Van der Bellen praised the new chancellor as someone “with considerable knowledge and skill to lead this country”.

Ms Bierlein was born in Vienna in 1949 and abandoned ambitions to become an artist, studied law and became a public prosecutor at 27.

She clashed with the last government last year, describing as “problematic” a law aimed at banning Muslim girls from wearing headscarves in primary schools. She told Der Standard newspaper at the time that “all religious communities should be treated equally”.

Ex-chancellor Mr Kurz praised his successor on Twitter as an “extraordinarily competent, experienced and honest person”.

“She will ensure a stable administration in Austria over the coming months and we will, of course, do our utmost to support her,” he added.

Mr Kurz is hoping to return to power in September, following a seven-point boost in support at last weekend’s European elections. But it remains unclear what political coalition would allow him back into office.

In 2017 he jettisoned the Social Democratic Party (SPÖ) and, after winning the subsequent election, threw in his lot with the far-right FPÖ. With both parties now his sworn enemies, the 32-year-old has urged voters to back his ÖVP to maximise his coalition options in the autumn.