An empty rail station is only visited by tourists. No trains head north from here

At the frontier between North and South Korea there is no sign whatsoever of imminent conflagration. It’s less a front line and more of a theme park. Video: Peter Murtagh 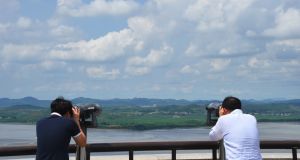 At the frontier between North and South Korea there is no sign whatsoever of imminent conflagration. It’s less a front line and more of a theme park.

In recent years the Demilitarised Zone (DMZ) between North and South has been turned into a sort of cold war Disneyworld, a Mecca for tourists who daily in their busloads throng every publicly-accessible part of the barbed wire and observation tower-lined 248km east-west divide slicing through the Korean peninsula.

The DMZ is a buffer zone, two kilometres on either side of the frontier proper. It was created by the July 1953 armistice that ended the war, under the auspices of the United Nations, and is maintained and patrolled on either side by the two opposing armies, observed by the UN.

Saturday morning and there are 34 of us on a bus heading north out of Seoul – a mix of 20-something backpackers, retirees ticking off their bucket list late in life and a few in-betweeners. In charge is Hye Young, a youthful 39-year-old former Etihad cabin crew member with fond memories of Dublin.

“Kim Jong-un,” she says addressing us as the coach trundles along the barbed wire fence-lined motorway, North Korea just on the other side of the estuary, “this is one of the most craziest guys...”

The first inkling of the somewhat surreal partnering of tourism with the current crisis, and the history behind it, comes when Hye Young talks about the JSA, the joint security area in the middle of the DMZ.

It’s an 800m diameter circle in the only part of the DMZ where North Korean soldiers and soldiers of the United Nations come face to face – and when they do, they stand ramrod rigid, fists clenched and eyeballing each other in silence like they’re Conor McGregor doing a face-off with his next opponent.

But the key thing about the JSA, Hye Young tells us on the bus, is that when visiting it you are not allowed wear flip-flops.

Why?, comes a voice from the back of the bus.

In case you have to run, she says, should something go wrong and the facing off dissolves into something explosive.

Has that ever happened? asks Ilias, a Canadian-Moroccan PhD candidate.

But the JSA has not always been a peaceful safe zone between the opposing sides. In 1976, there occurred what is known as the Panmunjeom Axing Incident when two US soldiers, working with a UN detail pruning a tree inside the JSA so observers had an unobstructed view were set upon by a truck load of North Korean soldiers and axed to death. Since then even the JSA has been split into “your side” and “our side” sections.

On our way to the DMZ (always pronounced in the American dee-em-zee style), Hye Young says tourists ask her how she feels about the current tensions.

“How do I feel?” she says, laughing. “I feel nothing. This is normal for us.”

Normal meets war at Jangdan Station, a long abandoned rail stop on the line that used to head north to Pyongyang when Korea was still one country. It is an old rusting steam locomotive with 1,200 Korean War bullet holes in it.

The train tracks run along a cantilevered boardwalk, the sleepers telling tourists that Pyongyang is but 208km away; Sinuiju, a city on the North Korean/China border, is 444km away; then Beijing 1,572km off and, finally, Berlin 11,065 km in the distance – journeys that no one will make from here for the foreseeable future.

A new station, Dorasan, with a cavernous but empty customs and immigration arrivals hall, and a platform signalling destination Pyongyang, remains a white elephant, a place visited only by curious tourists. No trains head north from here.

At the end of Jangdan’s boardwalk people have their pictures taken against the backdrop of the Imjingang Bridge, a metal railway bridge to nowhere that spans the Imjin river. Below them the greenest of green rice fields cover the river’s flood plain and military observation posts are everywhere to be seen.

In the 1970s three tunnels were discovered under the DMZ and a fourth was found in 1990. It was the Kim dynasty’s fantasy that one day the North Korean People’s Army would rush through the tunnels, overwhelm nearby Seoul and liberate the oppressed South Koreans.

At Tunnel No 3’s exhibition site, a film that is a mix of history and propaganda supported by heroic music tells the story of the war from the Seoul perspective before lurching into a pastoral melody and revealing how the DMZ has grown into an elongated nature reserve.

The strip of undisturbed flora and fauna, where ducks and eagles and otters, wild boar and deer live happily together among the land mines, is described as “a land of life where wild animals live in harmony” offering by example a “tremendous opportunity for people to coexist with nature”, as the commentator puts it.

Tunnel No 3 is accessed by a walkway sloping 300m into the ground to access 265m of the 1.6km long tunnel that is open to tourists.

Water seeps through the granite, dripping on to the never ending line of tourists stooping to avoid bashing their heads off the two meter tall roof. At the end a thick mass concrete wall signals North Korea just on the other side.

There’s a rectangular hole in the concrete through which one can see a well-lit void on the other side, and then another concrete wall with a matching viewing hole in it.

As everyone stops to look through, it’s not clear whether there’s another set of eyes on the other side.

Dora Observatory is the place to go for a gander at the enemy.

Perched on high ground overlooking the DMZ, a line of 32 coin-operated binoculars on a balcony offer a panorama into North Korea, and hundreds of tourists wait their turn for a magnified look at the weirdness on the other side.

The landscape over there looks sterile, almost dead. It is relatively bare by comparison with the South: the lushness of vegetation ends at the northern flank of the DMZ and there are few trees on the hills over there. They have been cut down, apparently for fuel for the harsh winter months.

A largish urban area, perhaps 5km in the distance over to the left, is said to be Kaesung City. But there is absolutely no evidence of life – peering through the binoculars no people can be seen, no vehicles either. Nothing is moving.

Over to the right and closer to the DMZ there is a separate knot of blue-coloured buildings, houses and some apartments mainly, but with some trees around it. This is Kijong-dong – Peace Village to Pyongyang – but the South Koreans call it Propaganda Village, a place constructed for no reason but to show tourists that living conditions in North Korea are really not that different from where you are from.

Outside Kijong-dong is a 160m flag pole, for a time the tallest flag pole in the world. It was erected in the 1980s by Kim Il-sung, the current dictator Kim Jong-un’s grandfather, in response to South Korea erecting a flag pole on its side that was itself a fairly impressive 98.4m tall.

Kim Il-sung’s response was perhaps his ultimate “mine is bigger than yours” gesture – a trailblazer for today’s posturing no doubt.

Some 2.8 million people, including one million South Korean civilians, died in the Korean War which was fought mainly in the area around Seoul – home today to 22 million.

But that reality somehow doesn’t seem real in the theme park tourist destination that is now the Demilitarised Zone – a feeling underscored as, on the way back to Seoul, the bus bounces along to the strains of Korean wunderkind Psy’s Gangnam Style.