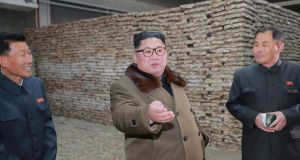 North Korean leader Kim Jong-un may still make a historic first visit to Seoul this year but only if stalled denuclearisation talks with the US resume, South Korea’s intelligence agency said.

“As Kim’s trip is linked to US-North Korea talks, it will be decided in line with progress [over Pyongyang’s dialogue with Washington],” the National Intelligence Service (NIS) told South Korea’s parliamentary intelligence committee, quoted by the Yonhap news agency.

When Mr Kim met South Korean president Moon Jae-in in Pyongyang in September, the two men agreed Mr Kim would become the first North Korean leader to visit Seoul before 2018 was out.

Uriminjokkiri, a leading North Korean state propaganda website, slammed the US for hindering closer ties between the two Koreas, saying US pressure on the South was the reason warmer ties on the Korean peninsula had not yet translated into more progress on denuclearisation.

Pyongyang is frustrated at the slow pace of talks as it wants economic sanctions to be eased, but the US has repeatedly insisted that any improvement in inter-Korean ties must be accompanied by progress on talks between the US and North Korea.

While North Korea has dismantled some nuclear test sites, repatriated American remains from the Korean War (1950-53) and returned US detainees, the US wants more concrete steps on denuclearisation, such as an inventory of its nuclear weapons.

“Unlike hopes and expectations of our people, North-South relations are not producing due achievements,” Uriminjokkiri said in the article. “It is because of the United States’ shameless rash act to block everything about inter-Korean relations while talking about the principle of ‘speed adjustment’.”

There has been speculation in South Korean media that a visit by Mr Kim could take place between December 18th and 20th, but Uriminjokkiri rejected these dates because December 17th is the anniversary of the death of Mr Kim’s father, Kim Jong-il.

Mr Moon’s presidential office said this week Mr Kim’s visit could take place this month or early next year, but it was up to North Korea.

There is also ongoing speculation about when US president Donald Trump will hold a second summit with Mr Kim, following up on their first meeting in Singapore in June. Mr Trump suggested it might take place in January or February, but high-level meetings for a summit have not taken place.

The 75-year-old Ms Ri is a national icon, who wept as she delivered news the country’s founder Kim Il-sung, grandfather of Kim Jong-un, was dead.