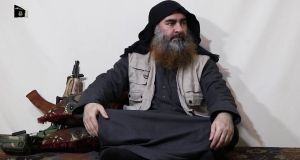 The fugitive Islamic State leader, Abu Bakr al-Baghdadi, has appeared in a propaganda video for the first time in five years, in which he recognises the terror group’s defeat in the Syrian town of Baghouz.

The appearance is only Baghdadi’s second on video, and comes weeks after the remnants of Isis were ousted from their last organised stronghold in the eastern Syrian desert.

Looking heavier than when he proclaimed the existence of the now-collapsed caliphate in mid-2014, Baghdadi blamed its demise on the “savagery” of Christians.

Sitting cross-legged alongside a Kalashnikov rifle, he speaks for no more than 40 seconds.

“Truthfully, the battle of Islam and its people against the cross and its people is a long battle,” he says. “The battle of Baghouz is over. But it did show the savagery, brutality and ill intentions of the Christians towards the Muslim community.”

The appearance seemed designed to acknowledge the loss of the remaining pockets of land held by Islamic State (also known as Isis) and to demonstrate that Baghdadi was still alive.

He had released several audio sermons in recent years, the last of which was in August last year, but his long absence from public view had fuelled speculation that Baghdadi remained impaired from wounds, or may have been killed.

Regional and western intelligence officials believe that Baghdadi’s grip on Isis had slipped since late last year, when a series of defeats at the hands of a Kurdish-led ground force, and a US-led air campaign, had forced the group’s senior leader into their last redoubt, a forsaken corner of Syria on the banks of the Euphrates.

Intelligence officials believe a series of rolling battles started last September between Baghdadi loyalists and another faction determined to oust him. Officials say dissent within the ranks culminated in a gunfight on the night of January 7th, which led Baghdadi to flee Baghouz with his bodyguards.

He is believed to have since crossed into Iraq, and it is thought he could be hiding in Anbar province in the west of the country.

With a $25 million (€22.3 million) bounty on his head, Baghdadi is the world’s most-wanted man, responsible for steering Isis into mass slaughter of opponents, and directing and inspiring terror attacks across the world.

Although largely seen as a symbolic figurehead of the global terror network – he was described as “irrelevant for a long time” by a coalition spokesman in 2017 – Baghdadi’s capture would be a coveted prize for the various players across both Syria and Iraq. But so far, he has eluded the Americans, Russians, Syrians, Iraqis and Kurds.

Officials suggest that a senior Isis figure, Abu Muhammad al-Husseini al-Hashimi, believed to be a distant cousin of Baghdadi, is instrumental in a move against him.

Hashimi recently released a 231-page book calling for an uprising against him, and for allegiance to be pledged to a new leader. – PA, Guardian