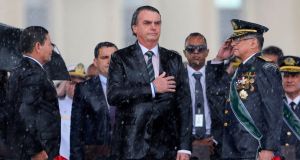 Of all the infighting that has marked the first four months of Brazilian president Jair Bolsonaro’s administration, the most bizarre scrap involves a former astrologer resident in Virginia.

That is where Olavo de Carvalho has lived since 2005, churning out books and giving online courses in philosophy despite the lack of any formal qualification.

After an erratic careerduring which the 72-year old has dabbled in everything from communism to mystic Islam, he has in recent years emerged with the help of Facebook and YouTube as a leading light of the new right in Brazil.

For the overwhelming majority of Brazil’s intellectual class his crude, heavily distorted analysis of national and world events – which betrays the belief that only he can properly detect the full reach of a supposed global left-wing conspiracy – exposes him as a fraud.

But this marginal thinker has been catapulted to sudden influence with the election of the previously fringe extremist Jair Bolsonaro to the presidency last year. The new president’s three eldest sons, who wield great influence over their intellectually incurious father, are all Olavo acolytes.

They helped place a number of their guru’s followers to prominent positions in the new administration, most prominently to head up the key education and foreign ministries. And when Bolsonaro visited Washington in March Olavo was seated beside him at a dinner in the Brazilian ambassador’s residence that US president Donald Trump’s former campaign manager Steve Bannon also attended.

But the Olavists’ record in government has so far been poor. Ricardo Vélez, whose signature initiative as education minister was to have school children filmed singing the national anthem and the videos sent to his ministry, had to be fired after 96 days of generalised incompetence. His replacement nonetheless was another Olavist.

Meanwhile, foreign minister Ernest Araújo was widely ridiculed when he recently defended the Olavista theory that Nazism and fascism were “phenomenons of the left”. (Olavo believes that Stalin, “the greatest strategist of all time”, conjured up the Nazi threat in order to take over half of Europe).

Having left the administration exposed to ridicule Olavo and his acolytes now look intent on destabilising it further with a series of attacks on Bolsonaro’s vice-president, retired four-star general Hamilton Mourão.

From his bunker in Virginia, Olavo has described Mourão as an “idiot”and even accused him of dying his hair. He has also unloaded on the other military men Bolsonaro, a former army captain, brought into government, labelling them among other things as pustules, uneducated, lazy and cowards in an unprecedented series of attacks.

At heart Olavo’s attacks seem to reflect his belief that the military men are trying to limit the influence of the new right within the administration, partly out of jealousy at its intellectual brio. These broadsides have been given heightened prominence because Bolsonaro’s sons have taken to social media to approve of Olavo’s offensive against their the vice-president, even using Bolsonaro’s Twitter account to do so.

Carlos, who manages his father’s social media channels, has been particularly aggressive in attacking Mourão online. And this has led some of the president’s political allies to wonder about his emotional stability even as other supporters have called for the general’s removal.

In response Mourão has suggested that the so-called “Wizard of Virginia” limit himself “to that which he does well, which is astrology”, but has also said that if asked by the president “I’ll get my things and go”.

But that would only serve to further destabilise an administration in which Mourão, whose previous declarations on Brazil’s political crisis inspired fears about his commitment to democracy, is now viewed as one of its few statesman-like figures.

Unlike his boss, he has used his few months in office to project himself as a relative moderate uninterested in the hard-right cultural agenda of the government’s Olavista wing. He has also undertaken an intense outreach to the diplomatic community in Brasília, the business community and even sectors of the left that the Bolsonaro family like to view as “terrorists”.

This has led to speculation about the general’s motives and just might explain the fury of Olavo and the Bolsonaro family at a time when the former captain is leaking credibility by the day.