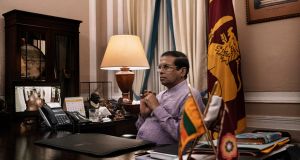 More evidence emerged on Monday that the Sri Lankan government had ignored detailed warnings about an imminent terrorist attack, days before suicide bombers killed more than 250 people at crowded churches and hotels.

In a memo dated April 9th and labelled “Top Secret, (Eyes Only),” the chief of national intelligence warned the country’s police chief that “Sri Lanka based Zahran Hashmi of National Towheed Jamaat and his associates are planning to carry out a suicide terrorist attack in Sri Lanka shortly.” The bombings came 12 days later.

The memo, the authenticity of which was confirmed by two high-ranking government officials, is the earliest one revealed so far to have so obviously conveyed a sense of urgency. A security memo two days later warned of “a possible suicide attack” by the radical Islamist group but did not say when it was expected.

Day by day, the paper trail of detailed warnings gets longer, casting more doubts on President Maithripala Sirisena’s claims that he did not know the attack was coming. Several Sri Lankan officials said it would have gone against standard practice for the national intelligence chief to have shared such highly classified information with police officials without first sharing it with the president.

No extra police officers were deployed to stop the attacks and Catholic Church leaders, anguished over the devastation, have said they would have cancelled Easter Mass had they known about the warnings.

The April 9th memo said the terrorist group was “planning to target some important churches” and the Indian high commission in Colombo, the capital, and “may adopt any of the following modes of attack: suicide attack, weapon attack, knife attack, truck attack”.

The memo closes: “It is important to alert the law enforcement agencies to be vigilant concerning the information.”

On Monday, Mr Sirisena banned “all forms of clothing that cover a person’s face and prevents them from being identified,” an order seen as being directed at the niqabs and burkas that some Muslim women wear in public. The president cited the limited state of emergency that he imposed last week, giving the government sweeping powers to arrest, search and seize.

Muslim leaders in Sri Lanka had already asked women not to cover their faces in the aftermath of the bombings and some of them described the ban, however temporary, as needlessly provocative. Muslims make up about 10 per cent of the country’s population and facial coverings are not common.

A few other countries, including France, prohibit wearing any garment in public that prevents facial identification. Sri Lanka is deep in mourning and the bitterness toward the government is only growing. Paralysed by months of political bickering and impasse, Sri Lanka’s elected leaders failed to take action after repeated warnings that suicide attacks were being planned.

At about 9am on Easter Sunday, seven bombers detonated backpacks loaded with explosives within minutes of one another at three high-end hotels and three churches across the island, leaving more than 250 people dead. In the days since, other terrorism suspects have set off several more explosives and engaged in a lengthy shootout with the police and military, claiming more lives.

For weeks, Indian intelligence agents had been issuing warnings. The Indians had been closely tracking the suspected ringleader, Zaharan Hashim, also known as Zahran Hashmi, and warned Sri Lankan intelligence services several times, including on the morning of the attack. The April 9th memo included the names and addresses of suspected members of the terrorist group.

Sri Lanka is hardly getting back to normal, but many people returned to work Monday. On the main roads, traffic was thicker, and some stores opened for the first time in days. For most of the country, a nighttime curfew has been lifted.

The Islamic State terror group has claimed responsibility for the attacks. In a video released by the group’s media wing, Zaharan, who was one of the suicide bombers, swore allegiance to Islamic State, also known as Isis.

Since the bombings, anti-Muslim sentiment has been rising across Sri Lanka. In a few areas, Muslims and Muslim-owned businesses have been attacked. Security forces and religious leaders have been trying hard to tamp down tensions. – New York Times