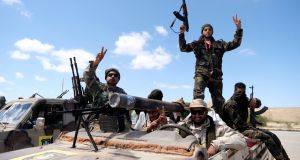 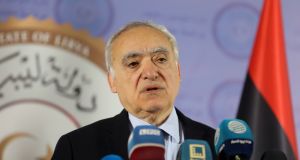 The UN envoy for Libya has made his strongest attack yet on the military strongman Khalifa Haftar as his forces intensify their assault on the capital, Tripoli.

In comments in Paris, where the French president, Emmanuel Macron, is seen as Europe’s biggest supporter of Gen Haftar’s attempt to control Libya after eight years of chaos that followed the toppling of Muammar Gadafy, Ghassan Salamé said Gen Haftar was no democrat and had little support in Tripoli.

In an unusually forceful judgment for a UN mediator, Mr Salamé said: “He is no Abraham Lincoln, he is no big democrat ... Seeing him act, we can be worried about his methods because where he is governing, he doesn’t govern softly, but with an iron fist.”

Mr Salamé’s reference to the former American civil war president may have been attempt to jolt the US to issue stronger warnings to Gen Haftar, the leader of the self-styled Libyan National Army (LNA).

The US is opposed to any UN Security Council resolution criticising Gen Haftar’s assault on Tripoli, and despite the accusations of war crimes by his forces, the Trump administration still believes he is, as part of a wider package, the right man to lead a unified national army.

The assault by the Haftar-led LNA, which is allied to a parallel government based in the eastern city of Benghazi, stalled on Tripoli’s stoutly defended southern outskirts last week. But fighting intensified again on Monday, with heavy shelling, small-arms fire and a warplane all heard in the centre of Tripoli.

The battle for Tripoli has killed 345 people, 22 of them civilians, a World Health Organisation official said on Monday.

The spokesman for Gen Haftar’s LNA claimed it was making rapid advances to the centre of the capital and to headquarters of the UN-backed Government of National Accord (GNA).

He admitted the UN Security Council was “suffering from a very deep division” after the US and Russia blocked a UK-drafted ceasefire resolution.

The apparent indifference, or covert support for the Haftar assault on Tripoli is in part a product of the support he receives diplomatically from France, the United Arab Emirates, Russia and Egypt.

Gen Haftar claims he is ridding the country of Salafi extremist militias that surround a weak UN-backed prime minister, Fayez al-Sarraj, but this narrative is challenged by many western diplomats who claim that Gen Haftar’s own forces are in effect a collection of militias and include Salafists.

A meeting last week in Rome enabled the main western countries to agree to support Mr Salamé’s efforts to restart peace talks based on a formula negotiated in Abu Dhabi in February in which Gen Haftar would be appointed supreme commander of Libyan national army but under civilian control.

The Abu Dhabi agreement was not accepted by all sides in March, possibly due to Gen Haftar making fresh demands on the location of his forces inside Tripoli. But the assault on Tripoli has arguably made it hard to revive, with both the GNA and Gen Haftar insisting they could not now envisage working alongside one another.

Mr Sarraj still has the support of the Turkish president Recep Tayyip Erdogan, as well as that of Qatar. Italy, another strong supporter of the Sarraj government, sees the battle for Tripoli through the lens of a revived threat of mass migration from Libya to Italy, something Mr Sarraj dismisses largely as a myth. – Guardian