Japan to declare state of emergency but avoid coronavirus lockdown 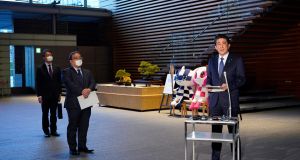 Japan’s prime minister, Shinzo Abe, prepares to speak to reporters in Tokyo on Monday ahead of a meeting about the coronavirus pandemic. Photograph: Franck Robichon/EPA

Japanese prime minister Shinzo Abe is set to declare a month-long state of emergency to deal with the coronavirus, effectively acknowledging that his government is losing control of the outbreak.

The declaration, expected on Tuesday, will mainly cover Tokyo and its surrounding prefectures – a region with a population of about 36 million – and the area around Osaka, Japan’s second largest economic block.

But Mr Abe insisted that Japan could not order the lockdowns that have seen many other parts of the world grind to a halt, saying economic and social activities would be maintained “as much as possible”.

Japan had appeared to keep the virus in check but the number of cases has nearly doubled in the last week. Tokyo, the centre of the outbreak, has recorded over 1,000 infections, including a record 143 on Sunday.

Many of the new cases have no clear infection routes. The country’s tally of 4,300 Covid-19 infections is a fraction of those of Europe and the United States but experts fear that Tokyo is “teeming” with unwitting hosts, said the Asahi newspaper.

Medical officials warn that the impact of an epidemic could overwhelm the health system – one hospital in central Tokyo has been forced to close after more than 40 medical staff came down with the disease.

Tokyo governor Yuriko Koike has used her daily press conferences to plea for “self-restraint”. But most companies are still operating and, even as late as Monday, school opening ceremonies were going ahead in parts of the capital.

Covid-19 has unleashed Japan’s “biggest economic crisis since the second World War”, according to the draft of an emergency government bailout set for approval this week. Mr Abe has pledged to spend about a trillion dollars to keep the world’s third-largest economy afloat.

Legislation revised last month stipulates that a state of emergency can be declared for up to two years if the virus is “rampant”, or threatens to have a major impact on the economy.

The legislation contains no enforcement mechanism, though local authorities will be given the power to name and shame public facilities and businesses that do not comply with directions to close.

Mr Abe’s statement left many wondering, however, about the impact on workplaces. “State of emergency, lockdown, or not, social distancing policy won’t work unless the government takes measures to make it possible for people to stay home,” said Koichi Nakano, a political scientist at Sophia University.

“The government needs to provide incentives and compensation so that people can stay home. It’s very simple, and it doesn’t really matter whether the state of emergency is declared or not. It’s not like it exhausted every other measure.”

Lawmakers huddled throughout Monday to discuss the measures, with speculation that they will include sharply curtailed transport services, to reduce Tokyo’s infamous morning commute.

City officials will be able to “ask” shopping malls, nightclubs, museums and theatres to close. Packinko parlours, where thousands of people sit cheek-by-jowl gambling on pinball-like machines, are also likely to shut.