Irish in Wuhan: ‘Life is quiet and peaceful. I’ll miss that when it goes back to normal’ 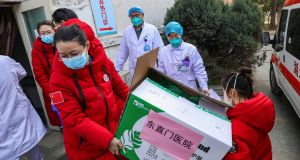 Doctors watch as medical supplies from Beijing are unloaded at a hospital in Wuhan in central China’s Hubei province on Thursday. Photograph: Chinatopix via AP

Today the sun came through the blinds, bright and yellow. It was a nice change, the last few days had started dull and grey. Two noses, eight paws, and two tails are dancing, walking and jumping around the bed telling me it’s time for the day to begin.

Up, washed, dressed, masks and leads on, ready for road. It was time to make our bi-daily pilgrimage around the community, with the two dogs.

The first thing to hit when the elevator arrives is the smell of bleach. The doors open, it’s so bad I’m thankful that I’m wearing a mask and I pity my two furry friends. I have to carry one because she’s repelled by the wet bleach they’re spraying around the elevator – it’s on the walls, the floor and the ceiling.

Outside it’s a pleasant day, warm – no wind. Usually, there are very few people outside, you might catch one, like an apparition or a shadow haunting a faraway corner or gliding along a path. A few days ago, it was strange, we met two men in full, yellow hazmat suits.

My girlfriend went pale, the dogs thought it was for their amusement; in the end, we just kept to our side of the road and they stayed on theirs. Scary sight but it turns out they’re volunteers driving medical personal around the city. There are actually a few people doing it living in my community.

Today was different, we met quite a few older people out having a walk. The pleasant weather and the monotony have encouraged people to venture out. Everyone was wearing masks, everyone was careful, everyone kept their distance.

We dallied and played a little at the very back of the community. The dogs like it there and it’s usually pretty empty, just abandoned refrigeration units, street food carts and rusty trucks that never seem to move. On the way back we met and startled a young woman who was sitting on a kerb enjoying the sunshine. When all of this began a rumour had circulated about dogs spreading the virus so people are wary of them. People have even been dumping their pets.

As we walked into our apartment building, I saw a sign that looked official so I snapped a photo to translate it. Turns out there are two people who may have the virus living in the building. That explains the excessive amounts of bleach in the elevator.

Breakfast was uneventful, we cooked a simple meal and once it was eaten, we cleaned the whole place. The apartment was starting to get a claustrophobic feeling so we opened all the doors and windows, got out the Chinese “Mr Muscle” and now the place is gleaming.

The rest of the day is spent, like every other day since we’ve been locked down, checking social media, watching movies, TV shows or reading. Our phones are constantly on the go; we’re both in lots of chat groups and recently there has been a lot discussion about evacuations. I’m not leaving. My life and loved ones are here so Ireland will have to wait until July or August to see me again.

Tonight, just like every other night, darkness slowly crept into the room. It always seems to seep up from the floors, up along the walls slowly turning the whiteness and gleam to grey and then quickly turning everything to black. We’ll spend tonight watching another virus-themed movie. Herself wants to watch Contagion so we’ll watch that and The Outsider, walk the dogs, then go to bed. Another day done.

There’s a lot of sensationalist stuff being written and said about the situation here in Wuhan. The tabloid media has painted this like it’s an “end of the world” situation. No one here thinks that. The Chinese are quite positive. They’re confident - since new medical teams from Beijing, the military and even specialists from Europe have arrived - that a solution will all be found soon and everything will go back to normal.

A few nights ago, in a dramatic outpouring of solidarity, people in apartments throughout my community, and all over China, opened their windows, shouted slogans of support and encouragement and even sang the national anthem. It was all organised through social media but people really got behind it and the racket went on for the best part of 30 minutes. It was a truly unique and unusual experience. Apart from that, life is quiet and peaceful. I’ll miss that when everything goes back to normal.