Indians to head to the polls in bitterly contested election 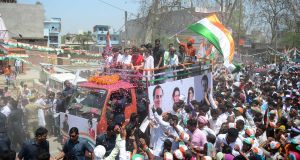 Voting in the first of seven rounds of polling in India’s general elections begins on Thursday in what is emerging as one of the country’s most aggressive, belligerent and bitterly contested ballots in recent decades.

Polling will take place in 91 of 543 parliamentary constituencies in the opening day of elections that opposition party politicians and commentators assert will be a battle for the “soul of India”.

According to these surveys, conducted by national television news channels, online media sites and newspapers, the Bharatiya Janata Party (BJP) was likely to win 228 seats on its own, some 54 fewer than the 282 it won in the last general elections, in 2014. This was the largest mandate won by a single party after three decades of successive federal coalitions.

The opinion polls also predicted that the principal opposition Congress party, led by Rahul Gandhi, a scion of the Nehru-Gandhi political family that has dominated Indian politics for a century, could double its dismal 2014 tally to 88 seats; however, it would be unlikely to wrest power from the BJP.

The polls give the Congress-led United Progressive Alliance, which was in power for two back-to-back terms until 2014, some 141 seats, leaving 129 to other parties and independent candidates, who could end up holding the balance of power in the event of an inconclusive outcome.

More than 900 million eligible voters – including more than 15 million first-time voters – will determine the fate of about 10,000 candidates representing scores of political parties in voting that ends on May 19th.

The election results will be announced four days later, on May 23rd.

Last December Mr Modi suffered a major setback when the BJP lost three state elections in central and western India to the Congress party, after voters expressed their dissatisfaction with the federal governing party’s poor economic and administrative performance.

But the surge in tension with neighbouring Pakistan in mid-February prompted a major turnaround in Mr Modi’s political fortunes, after he projected himself as a muscular defender of national security and the Congress party as pusillanimous, indecisive and unpatriotic.

Mr Modi had ordered an air strike against an alleged Islamist militant camp inside Pakistan after a suicide bombing killed more than 40 Indian paramilitary police in the disputed Kashmir state.

The two countries’ air forces then engaged in a dogfight after Pakistan responded with an air assault on an Indian military installation, and the threat of war between the nuclear-armed states loomed before western powers, led by the US, helped defuse the crisis.

Mr Modi threatened further strikes if Pakistan persisted in supporting the Muslim insurgency in Kashmir, which is divided between the two neighbours, but claimed by both. Pakistan has consistently denied any role in supporting the Kashmiri insurgency, which has claimed more than 70,000 lives.

Unbalanced by Mr Modi’s overt aggressive nationalism, which has received raucous support at his public rallies across India, the Congress and other regional parties tried, albeit feebly, to steer the campaign back to the BJP’s broken promises over the economy, employment and farmer distress.

But the opinion polls suggest the elections are a somewhat uneven struggle, exacerbated by disunity and bickering amongst the opposition parties.

The Congress party recently pledged a monthly payment of 6,000 rupees (€77) to some 50 million of India’s poorest families in a bid to eradicate poverty, but several economists have questioned the fiscal efficacy of such a scheme.