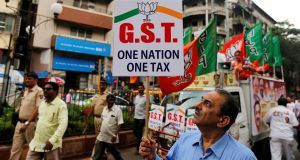 A supporter of India’s ruling BJP holds a placard during a rally to support implementation of the goods and services tax in Mumbai on Friday. Photograph: Shailesh Andrade/Reuters

India will formally introduce its biggest tax reform since independence 70 years ago at midnight on Friday, as it braces itself for the economic chaos this fiscal measure is projected to generate.

Initially proposed in 2006, the GST incorporates more than a dozen state and federal levies into one uniform tax with the aim of unifying all of India’s 1.28 billion people into a single market.

The complicated and multifaceted scheme, which includes four tax rates ranging from 5 per cent to 28 per cent, with numerous exemptions, has the potential to confuse businesses and consumers alike.

Alcohol and petrol, which together comprise the highest sales of all consumable goods, will remain outside the GST’s scope, as they are subject to local provincial taxes.

Scores of traders and businessmen interviewed by television news channels over the past week on the tax reform were largely clueless about how to execute it. “We are not against GST, but it’s so complicated that most businesses will not be able to cope,” said Baldev Kumar, a New Delhi television dealer.

Tens of thousands of traders and owners of small companies, he said, would find it difficult, if not impossible, to meet GST’s requirements of registering online and filing tax returns.

To compound the problem, a majority of those affected by the tax reform are in areas plagued by power shortages and inadequate internet connectivity.

More than 70 per cent of small businesses in India have yet to adopt digital technology and the GST poses a major challenge for them to computerise themselves, said Praveen Khandelwal of the Confederation of All India Traders. He demanded more time from the government before implementation of the new regime.

There are concerns about how India’s unwieldy economy and non-tax compliant society will transition to a system that involves filing 49 tax returns online annually– four each month and one overall for the entire year.

Delays are subject to fines, whilst the protocol for rectifying errors remains somewhat nebulous, officials said.

Less than 1 per cent of Indians pay tax and nearly 90 per cent of workers are employed mostly in the informal sector. But finance minister Arun Jaitley claims the GST will eventually expand India’s narrow tax base, generate additional revenues, augment the country’s gross domestic product and reduce inflation.

However, it is unclear what damage the GST will inflict on the country’s €1.75 trillion economy before benefits kick-in.

The federal authorities acknowledge the GSTs complexity and have relaxed norms for two months as a trial period, but ruled out any further concessions.

This, in turn, has triggered industrial strikes across the country and prompted traders to liken GST to the financial and social bedlam that followed Mr Modi’s three-month long demonetisation drive last November.

Independent bankers and financial analysts estimate that it will take at least two years for the Indian marketplace to settle down and function smoothly after the tax reform takes effect.

“There will be unanticipated problems, but we will work on resolving them,” said economist Bibek Debroy, a member of the National Institution for Transforming India, a government-sponsored think tank.