Trump-Xi honeymoon is over as US threatens sanctions 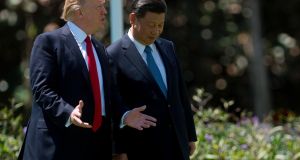 Less than 100 days after Donald Trump hosted Xi Jinping at his Florida resort and predicted that the two presidents were “going to have a very, very great relationship”, the Mar-a-Lago honeymoon is over. On Thursday the US president threatened to impose sanctions on a Chinese bank for its alleged dealings with North Korea and confirmed a new arms sale package for Taiwan.

Both measures were guaranteed to upset Mr Xi. Beijing has previously expressed its opposition to targeted sanctions against Chinese companies, which it sees as “long-arm jurisdiction”, and has for some time viewed Taiwan as a “renegade province”. But the timing, in Beijing’s eyes, heaps insult upon injury.

Mr Xi is now in Hong Kong, where on Saturday he will preside over ceremonies marking the 20th anniversary of the former UK colony’s return to China. “The Chinese side has seen these things coming but is probably exasperated by the timing,” said Yanmei Xie at Gavekal Dragonomics, a Beijing-based consultancy. “Beijing wants the international media to focus on the pomp and ceremony of Xi Jinping’s visit to Hong Kong, not its failure to rein in North Korea.”

The two presidents are also scheduled to meet next week in Germany on the sidelines of a G20 summit, in what is now certain to be a frostier encounter than their first meeting in Mar-a-Lago in April.

The proposed sanctions would target Bank of Dandong, which is a relatively small financial institution but a big symbol. The last time the US government targeted a Chinese bank for its alleged dealings with North Korea was in 2007, when the Bush administration barred US companies from dealing with Banco Delta Asia in Macau.

The move against Bank of Dandong and the $1.4 billion (€1.2 billion)Taiwan arms package also come just two weeks before the world’s two largest economies are due to complete an initial round of negotiations aimed at “rebalancing” their trading relationship.

Just hours after both measures were announced, Mr Trump’s new ambassador to Beijing celebrated an “early fruit” from those talks – the Chinese government’s lifting of a long ban on US beef imports. “We’ve been waiting nearly 14 years for this,” Terry Branstad told reporters and US cattle ranchers at the ceremony on Thursday. “It is a key priority for the US president to reduce the trade deficit [with China] and this is one of the ways we can do it.”

Mr Branstad added that the resumption of US beef imports into China represented a “new beginning” in the two countries’ relationship.

Unlike previous presidents, however, Mr Trump has explicitly linked Sino-US security talks with trade and economic disputes. In April the US president said he had promised Mr Xi a “far better” trade deal if Beijing applied more pressure on North Korea, which is trying to develop nuclear missiles capable of reaching the continental US.

Chinese analysts say that increases the chance that Beijing could respond to slights on security issues with retaliation on trade and economic matters. “Unilateral actions like these are not going to work and could backfire,” said He Weiwen at the Center for China and Globalization, a Beijing think-tank. “They will cast a shadow over future co-operation between China and the US.

“China will only implement sanctions approved by the UN Security Council, ” added Mr He, a former Chinese diplomat. “China should not be blamed for not applying extra sanctions against North Korea.”

Paul Haenle, a former Asia adviser to both Barack Obama and George W Bush, said US expectations had been too high after the Mar-a-Lago summit. “The Chinese have been confident in their ability to handle Trump,” he said. “Their strategy has been to dole out small concessions here and there, but they never changed their fundamental approach on North Korea.”

Shi Yinhong, a foreign relations expert at Renmin University in Beijing, argued that the Chinese government would only impose “the ultimate sanction” on North Korea - a long-term suspension of oil and fuel supplies - if Pyongyang carries out a new nuclear test. “China has already done a lot,” Prof Shi said. “But China does not control North Korea.”