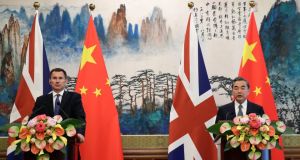 China has offered to hold talks with Britain on a post-Brexit free trade deal during a visit by foreign secretary Jeremy Hunt, who is in Beijing to try to rekindle the “Golden Era” of Sino-British co-operation.

Mr Hunt, who succeeded Boris Johnson this month as foreign secretary, accidentally touched on tensions between Beijing and Tokyo over regional influence when he said his Chinese wife Lily Guo was Japanese.

“My wife is Japanese – my wife is Chinese. That’s a terrible mistake to make,” he told his Chinese counterpart Wang Yi. Mr Hunt speaks Japanese and lived there as an English teacher.

The gaffe was laughed off as matters turned to the far trickier issue of trade, which will dominate Mr Hunt’s trip, his first as foreign secretary, as China is seeking allies in its trade war with the US.

The conflict was started by the Trump government, which accuses China of stealing American intellectual property and discriminating against foreign firms. He wants China to address a $375 billion (€321 billion) trade surplus and has imposed tariffs on Chinese imports.

Mr Hunt said Mr Wang had offered to open discussion on a possible free-trade deal between Britain and China, post-Brexit.

“That’s something that we welcome and we said that we will explore,” Mr Hunt told a joint news conference, without elaborating.

Britain is eager to secure a strong trade pact to help it offset the potential effects on the economy after it leaves the European Union.

Prime minister Theresa May failed to secure a formal agreement for a trade deal during her visit to China this year. Trade links between Britain and China are worth about €78 billion.

Chinese statements on Brexit have been supportive of Britain, but couched in broad terms without specifics.

Ever-cautious Beijing is clearly waiting to see how the situation develops once the UK has formally left the European bloc. Formal talks on trade cannot begin until Britain leaves the EU next year.

Mr Wang took the opportunity to criticise Washington’s trade stance but said China was open to negotiation to end the trade war.

“The responsibility for the trade imbalance between China and the United States lies not with China,” he said. The global role of the US dollar, along with low American savings rates, huge levels of consumption and restrictions on high-tech exports were to blame for the imbalance.

“China’s door to dialogue and negotiations is always open, but dialogue needs to be based on equality and mutual respect and on rules,” Mr Wang said. “Any unilateral threats and pressure will only have the opposite effect.”

Mr Hunt will also be hoping to talk about Hong Kong’s semi-autonomy and growing concerns that Beijing is eroding the former crown colony’s civil liberties.

Mr Wang said China remained committed to the “one country, two systems” governing framework in Hong Kong, introduced 21 years ago this week after the city reverted to Chinese rule, but he also took a firm line on what Beijing sees as none of Britain’s business.

“But of course China will continue to support and will stay committed to one country, two systems,” he said.