India has executed four men for the rape and murder of a 23-year-old woman on a bus in New Delhi in 2012. Video: Reuters 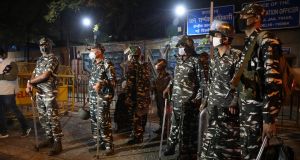 Indian security personnel stand guard outside the Tihar prison complex where the men were hanged in New Delhi on Friday. Photograph: Rajat Gupta/EPA

India on Friday executed four men convicted of gang raping and murdering a 23-year-old medical intern on a moving bus in New Delhi in December 2012.

“The beasts have been hanged,” said the victim’s mother, Asha Devi, outside Tihar jail in New Delhi where the four murderers, aged between 25 and 32 years, were executed at dawn.

Ms Devi said the family’s wait for justice had been agonising. “I hugged my daughter’s photo,” she told reporters after the hanging, which came more than seven years after her daughter and a male companion were kidnapped by five men and a juvenile driving a bus as they were returning home from the cinema in an upmarket Delhi neighbourhood.

Both were badly beaten and tortured by their kidnappers on the moving bus and the girl was gang raped. The pair were hurled from the vehicle after their ordeal and left bleeding on the road.

It later transpired that the victims’ screams had been ignored not only by passersby but even by police patrol vehicles. Timely help could have saved the girl’s life.

Stunned by the brutality of the murder, protests erupted across India, with tens of thousands expressing rage at the authorities and praying collectively at candlelit vigils for the victim as she struggled to recover from internal injuries in a Singapore hospital.

The girl was christened Nirbhaya, or fearless, by the public and media as her identity could not be revealed for legal reasons.

A fast-track court early the following year began proceedings against five men and a juvenile who had been arrested for the crime.

Weeks later, one of the main accused in the case, who was the driver of the bus in which the crime took place, was found hanging in his prison cell. Then in September 2013 the four surviving murderers were sentenced to death.

The juvenile, however, was interned for three years in a detention centre and released in 2015. He is now about 26 years old.

Less than two hours before their hanging on Friday, the country’s supreme court dismissed their final petition, ending a saga that had traumatised India.

“We have all waited so long for this day,” Ms Devi said.

Nirbhaya’s nightmare ushered in tougher laws to punish sexual offences in India, including introducing the death sentence for convicted rapists, but these have not proven a deterrence.

According to the National Crime Records Bureau, police registered 33,977 rape cases in 2018, or a daily average of 93.

But women’s rights activists maintain that only 10 per cent of rape and other sexual harassment cases ever get reported in India, as there is intense social pressure in a largely conservative country against victims or their families going public with complaints.

In many instances women have been blamed for attacks by the way they either dressed or behaved and have been dissuaded from taking matters further.