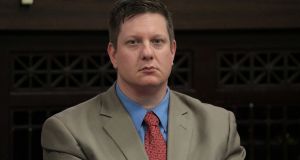 A jury has convicted Chicago police officer Jason Van Dyke of second-degree murder in the 2014 shooting of teenager Laquan McDonald.

Van Dyke was charged with first degree-murder in the October 2014 killing, a charge that requires a finding that the shooting was unnecessary and unreasonable.

The judge told jurors the second-degree charge was also available – requiring them to find Van Dyke believed his life was in danger, but that the belief was unreasonable.

Jurors also convicted him of aggravated battery, but acquitted him of official misconduct.

It is the first time in 50 years that a Chicago police officer has been convicted of murder for an on-duty death.

Mr McDonald was carrying a knife when Van Dyke fired 16 shots into the 17-year-old as he walked away from police.

Second-degree murder usually carries a sentence of less than 20 years.

By far the most serious charge Van Dyke (40) faced was first-degree murder, which carries a maximum sentence of life in prison.

But Judge Vincent Gaughan told jurors before they began deliberating that they could consider the charge of second-degree murder.

Van Dyke was the first Chicago police officer to be charged with murder for an on-duty shooting in more than 50 years. That case, which also involved an officer shooting someone with a knife, ended in conviction in 1970.

The verdict is the latest chapter in a story that has made headlines since a judge ordered the release of a patrol car video of the shooting in November 2015.

Officers had Mr McDonald largely surrounded on a city street and were waiting for someone to arrive with a stun gun to use on the teenager when Van Dyke arrived, according to testimony and video.

The video, played repeatedly at trial, showed Van Dyke opening firing. Mr McDonald spins, then crumples to the ground. Van Dyke continues to shoot when the 17-year-old is lying in the street. – AP