How Singapore waged war on coronavirus 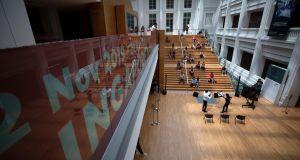 A musical performance in the National Gallery of Singapore. Performances previously scheduled for the finale were changed to live streaming instead as part of preventive measures against COVID-19 coronavirus cases. Photograph: How Hwee Young/EPA

Singaporean lawyer Iman Ibrahim was enjoying her snowboarding holiday in Italy, Switzerland and Austria this month when the coronavirus outbreak in Europe suddenly turned the trip into a race home.

With borders and mountain resorts closing around her and her flight back to Singapore cancelled, she drove to Germany and caught whatever plane she could back to the south-east Asian city state.

“The situation was changing every few hours . . ..but once you’re back in Singapore you know everything is efficient and you will be looked after,” she said.

Ms Ibrahim did not know just how lucky she was to have made it home to the city, an international financial hub known for its quasi-authoritarian but effective government. Three days after her return, she tested positive for the coronavirus.

Singapore reported its first two deaths from the pathogen only this weekend, despite being one of the first countries to be hit by the outbreak outside China two months ago. That has made it one of the safest places in the world for patients of the disease, which has already killed almost 13,000 people globally.

The city’s success in dealing with the outbreak is attributed to the government’s speed in imposing border controls soon after the disease first erupted in China, meticulous tracing of known carriers, aggressive testing, a clear public communication strategy and a bit of luck.

“There is nothing they should be doing differently,” said Ying-Ru Jacqueline Lo, the World Health Organisation representative to Malaysia, Brunei Darussalam and Singapore.

After controlling the first infections, Singapore now faces a second wave of cases from returning travellers, such as Ms Ibrahim. Authorities tightened travel restrictions and social distancing measures after the number of cases more than doubled to 432 in the past week. Yet many analysts believe Singapore will also bring the second wave under control.

Some of the city-state’s advantages in confronting the outbreak are difficult for larger western countries to replicate, such as its small population of 5.7m. It also learnt from its experience of Sars in 2003, which forced it to strengthen its healthcare system.

But similar to some Asian neighbours, such as Taiwan, South Korea and Hong Kong, which have also managed to slow infection rates, Singapore’s example could contain lessons for the US and Europe, which have been caught wrongfooted by the virus.

As soon as information about the disease emerged from Wuhan, the city at the centre of China’s outbreak, Singapore began preparing by ramping up laboratory capacity for mass testing and developing its own test kits. This was seen as instrumental to containing infections and not overwhelming hospitals, a problem faced by countries such as Italy.

As of March 20th, Singapore had conducted 38,000 tests, or about 6,800 examinations per million population, the health ministry said. That rate outpaced South Korea, the region’s poster child for fast and expansive testing, which had administered about 6,100 tests per million population in the same time frame.

“We used the lead time that China gave us by its massive shutdown to really refine our readiness,” said Dale Fisher, professor of infectious diseases at the National University of Singapore.

“By the time we had one of our cases, we were able to do tests and within a week, tests were available in all major hospitals.”

Some experts say the fact most patients in the city have been below the age of 65 also helps explain the low number of deaths.

But Leo Yee Sin, executive director at the National Centre for Infectious Diseases, which was set up after Sars and is helping spearhead Singapore’s response to the coronavirus, said: “I don’t consider us lucky. We are just giving the best of critical care to those affected.”

She said 15 per cent of confirmed cases were on ventilators in intensive care units, with two undergoing ecmo treatment, whereby blood was drained out of a person’s body and oxygenated in a machine.

The country’s business community also moved quickly. Soon after Singapore reported its first cases, banks divided their teams between offices, home working and emergency trading floors, many of which were in an outlying industrial area near the city’s Changi airport.

But while government measures to contain the first wave of infections were effective, they also raised questions about the invasiveness of the state. Surveillance cameras, police officers and contact-tracing teams have helped the government find 7,065 close contacts of confirmed cases, who have all been quarantined.

The government on Friday launched TraceTogether, an app that uses bluetooth to record distance between users and the duration of their encounters. People consent to give the information, which is encrypted and deleted after 21 days, to the health ministry. The department can contact users in case of “probable contact” with an infected individual.

“There’s a higher degree of acceptance of being monitored by the state,” said Chong Ja Ian, associate professor of political science at the NUS. “That makes some of the more invasive methods for contact tracing easier.”

But, he added, once such mechanisms are in place, “it opens the door for someone five to 10 years down the road to make use of this space in ways that are perhaps less noble”.

The government has also used a tough new online falsehoods law to correct misinformation in posts about the coronavirus, which critics have argued gave authorities too much latitude to censor.

And even though Singapore has been successful so far, the battle is far from over. To deal with a potential second wave of infections, the government on Sunday banned short-term visitors from entering or transiting through the country. Returning residents will have to undergo quarantine for 14 days at home or risk a fine of up to S$10,000 ($6,900) and/or six months in jail.

“This is going to be a long duration battle. We are only seeing the beginning,” Prof Leo said.

1 Coronavirus: More ‘striking’ evidence BCG vaccine might protect against Covid-19
2 Genetics shed light on origins of Irish strains of Covid-19
3 Eccentric Thai king’s flying visits ensure a colourful German lockdown
4 Donald Trump’s clown car administration has put the fear in all of us
5 Coronavirus: Why are men twice as likely to die as women?
Real news has value SUBSCRIBE