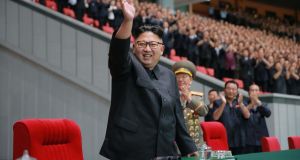 As soon as Rachel Lee wakes up, she fires up her computer and starts scouring North Korean newspapers, television broadcasts, academic journals and obscure websites affiliated to the secretive nation.

Alongside the propagandist prose thick with dogma and slogans, images of politburo meetings, military parades, leadership rostrums, state anniversaries and funerals are parsed in search of one vital clue: who is inching nearer to Kim Jong-un, the supreme leader.

This painstaking research that the North Korean analyst has carried out for 20 years for the US government, think tanks and news services, is critical in helping spy agencies and diplomats assess who might be gaining, or losing, influence in the leadership.

“The closer you are to the centre . . . the more important you are,” said Ms Lee.

However, the limitations of foreign insight into Pyongyang’s inner workings have been exposed by the weeks-long absence of Mr Kim. Unconfirmed reports of life-threatening health issues, have sparked global intrigue and raised fears of instability in the volatile, nuclear-armed state.

Former US government analysts do not think Mr Kim is dead, but they are still trying to work out exactly what health problems he may be suffering.

“For this one, I’m inclined to think that nobody knows – including US intelligence,” said Ms Lee.

On Monday, President Donald Trump suggested that the 36-year-old dictator was alive, despite speculation of a grave illness.

Sue Mi Terry, a former CIA analyst who briefed presidents George W Bush and Barack Obama on North Korea, said she favoured communications intercepts when the “frustrating” task of gleaning thousands of pieces of information on the country fell to her.

But even then, she was wary she might be fed deliberate misinformation if the North Koreans suspected the US was listening in.

“Trust me, they[US officials]don’t know what’s going on,” said Ms Terry, now a senior fellow with the Center for Strategic and International Studies.

“It’s not only the Americans; it’s the rest of the world – there is a reason why no one knew for 48 hours [that former leader Kim Jong Il had died] and we found out only because the North Koreans decided to tell us.”

Ms Terry has relied on eavesdropping, satellite imagery and “humint” – human intelligence from some of the few North Korean officials who were on the CIA’s books. “Their control of information is so tight. The only way we would know now is if one of the top elites is on our payroll, but even then, how would they know?”

Jung Pak, another former CIA analyst, described the system as Mr Kim at the “bull’s eye” of multiple information circles, meaning the regime deliberately deprived not only the wider population, but also parts of the inner circle of information.

“The bureaucracy don’t talk to each other,” said Ms Pak. “Kim has been purging hundreds of people. He wants to keep shaking things up so no one knows who to trust and individuals are less likely to start rising up [the ranks] and collect a group of friends. Secrecy is part of survival.”

Thae Yong Ho, a former senior North Korean diplomat in Europe and the UK, has questioned whether even Beijing, which has much closer ties with Pyongyang, knows much about Mr Kim’s illness.

“It is not a situation that even North Korea’s high ranking officials will be aware of, except [Mr Kim’s wife] Ri Sol Ju and his closest aides,” said Mr Thae, now a high-profile defector and lawmaker in Seoul.

Eyes in the sky

Satellite imagery and spy planes are also critical in analysing North Korea, giving military intelligence in South Korea and the US insight into the country’s missile, nuclear and chemical weapons programmes.

The technology has also played an important role in identifying Pyongyang’s sanctions-busting activities, including mapping of illegal shipping transfers. And it has helped with attempts to trace Kim Jong-un’s movements.

On Saturday, 38 North, a Washington think tank programme monitoring North Korea via commercial satellite imagery, reported that a train “probably belonging to Kim Jong-un” was spotted near the leader’s compound at Wonsan since April 21st. It said that the location “does lend weight to reports that Kim is staying at an elite area on the country’s eastern coast”.

Still, experts urge caution over drawing conclusions from such information given Pyongyang’s long-running success in diversion.

Unlike his hermit-like father, Kim Jong-un has engaged with international leaders. Since 2018, he has attended summits with Xi Jinping, the Chinese leader, and South Korea’s Moon Jae-in as well as three meetings with Mr Trump. These engagements have allowed for more sideline meetings between diplomats.

Numerous other meetings, often referred to as Track Two and not made public, continue to be regularly held in Asia and Europe between North Korean officials or their proxies and foreign, non-government North Korea experts, according to people who have attended the meetings.

The meetings are typically focused on economic or foreign policy issues, providing a platform for experts and officials to develop a diplomatic relationship rather than a means to extract sensitive information.

Now, as Mr Kim’s continued absence turns attention to whether his sister Kim Yo Jong could succeed him, intelligence experts remain in the dark.