Gove rejects EU request for ‘mini-embassy’ in Belfast after Brexit

The British minister leading negotiations on the post-Brexit Northern Ireland protocol has rejected a European Union request for what he described as “a mini-embassy” in Belfast. Video: UK Parliament 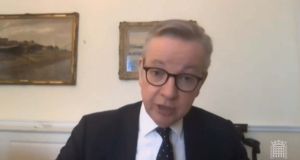 Michael Gove giving evidence by videolink to MPs during a select committee on the future relationship with the European Union and on post-Brexit negotiations. PA Photo. Photograph: House of Commons/PA Wire

The British minister leading negotiations on the post-Brexit Northern Ireland protocol has rejected a European Union request for what he described as “a mini-embassy” in Belfast.

The EU wants to open an office in Northern Ireland to monitor checks and controls on goods crossing the Irish Sea after the end of the current transition period.

But Michael Gove told a committee of MPs that Britain saw no reason for any permanent presence for the EU apart from its delegation’s headquarters in London.

“Of course it is the case that the EU has the right to monitor the operation of what UK officials are doing but there’s no need for there to be a mini-embassy in Belfast in order for that to happen,” he told the House of Commons committee on the future relationship with the EU.

In a letter to the European Commission, paymaster general Penny Mordaunt said any necessary monitoring could be carried out by means of ad hoc visits by EU officials to the North.

Under the protocol, goods moving from Great Britain to Northern Ireland will be subject to EU customs controls unless they are explicitly exempt.

The two sides agreed that checks should be carried out by the British authorities but that EU officials could monitor how they are implemented.

“The proposition of a permanent EU office, with permanent staff whose primary purpose (as you acknowledge) would be to engage in a form of supervision of UK implementation of the protocol, is not consistent with the delicate balance of rights and responsibilities, on both parties, set out in the protocol,” Ms Mordaunt said.

“Second, one of the primary purposes of the protocol is the protection of the Belfast/Good Friday Agreement in all its dimensions. We must therefore aim to implement it in a way that is acceptable to both communities in Northern Ireland and mitigates its effects on them. Both the EU and the UK face obligations in this regard and both sides must make special efforts to develop reasonable proposals in implementing the protocol. A special EU office, uniquely in the regions and nations of the UK, in order to implement a protocol that has attracted controversy, would in our view be divisive in political and community terms.”

Mr Gove was pressed on what steps his government was taking to prepare ports on either side of the Irish Sea for the customs checks that will be required under the protocol. But he insisted that “the precise nature of how the protocol will be implemented” will be determined in a specialised British-EU committee which holds its next meeting on Thursday.