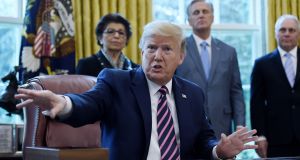 US president Donald Trump: Scientists, doctors and industry have rejected as lethal his suggestion for the use of bleach. Photograph: Olivier Douliery/AFP

Medical experts across the world unanimously rejected a suggestion by US president Donald Trump that bleach or disinfectant could be injected into humans as a possible treatment for coronavirus.

During the White House coronavirus briefing on Thursday evening, Mr Trump asked medical experts in attendance if injecting disinfectant inside the lungs could cure the virus.

“I see the disinfectant that knocks it out in a minute,” he said of Covid-19. “And is there a way we can do something like that by injection inside, or almost a cleaning? Because you see it gets inside the lungs and it does a tremendous number on the lungs, so it would be interesting to check that.”

He also suggested that ultra-violet light could be brought into the body through the skin “or in some other way” to treat coronavirus sufferers.

Mr Trump was speaking after he invited Bill Bryan, the acting undersecretary for science and technology at the department of homeland security, to deliver a presentation on research into the potential impact of heat and sunlight on Covid-19, which has claimed more than 50,000 lives in the United States. Mr Bryan, whose background is in the military, also mentioned the use of bleach and disinfectant to kill the virus.

Amid a growing backlash against his comments on Friday, Mr Trump claimed that his remarks had been sarcastic, and that his question had been directed at reporters and not the medical experts in the room – a claim not borne out by footage which clearly shows the president turning to the medical officials sitting to his right and not the journalists in front of him.

“I was asking a question sarcastically to reporters like you just to see what would happen,” he said, when asked about his comments.

Earlier in the day, White House press secretary Kayleigh McEnany said the president’s remarks had been taken out of context.

“President Trump has repeatedly said that Americans should consult with medical doctors regarding coronavirus treatment, a point that he emphasised again during yesterday’s briefing,” she said in a statement on Friday. “Leave it to the media to irresponsibly take President Trump out of context and run with negative headlines.”

The apparent effort by the White House to contain the controversy came as health experts condemned Mr Trump’s comments.

“This notion of injecting or ingesting any type of cleansing product into the body is irresponsible and it’s dangerous,” Dr Vin Gupta, a pulmonologist, told NBC. “It’s a common method that people utilise when they want to kill themselves.”

“There’s no circumstance under which you should take a disinfectant or inject a disinfectant for the treatment of anything,” said Scott Gottlieb, former commissioner of the Food and Drug Administration (FDA), the main pharmaceutical regulatory body in the US

The British company that makes bleach products including Lysol and Dettol, also issued a statement. “As a global leader in health and hygiene products, we must be clear that under no circumstance should our disinfectant products be administered into the human body (through injection, ingestion or any other route),” Reckitt Benckiser said.

House of Representatives speaker Nancy Pelosi also chastised the president for his comments.

“The president is asking people to inject Lysol into their wounds, and Mitch [McConnell] is saying that states should go bankrupt,” she said, referring to the Senate majority leader’s comments this week that states should declare bankruptcy rather than receive federal money. “It’s a clear, visible [sign], within 24 hours, of how the Republicans reject science and reject governance.”

As controversy over Mr Trump’s comments dominated the news agenda, the FDA issued a warning on the dangers of anti-malarial drugs such as hydroxychloroquine previously touted by the president as a potential treatment for coronavirus, pointing to possible “serious heart rhythm problems”.