UK not ‘past the peak’ of coronavirus, chief medical officer says 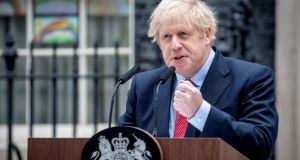 Britain’s prime minister Boris Johnson: The country is turning the tide on coronavirus but is at “the moment of maximum risk”. Photograph: Pippa Fowles

Britain has not passed the peak of coronavirus infections, the country’s chief medical officer has warned as Boris Johnson dampened speculation about an early easing of the lockdown. Prof Chris Whitty told a press conference in Downing Street that although Monday’s daily death toll was the lowest in a month, Britain was “definitely not consistently past the peak across the whole country”.

Prof Whitty said that, as politicians considered easing social distancing restrictions in the coming weeks, they would have to choose between reopening schools and allowing more businesses to open.

“There is no perfect solution where we are going to end up being able to do all the things that people want and, at the same time, keep R below one. So, there are going to have to be some very difficult choices between different things, all of which ideally all of us would love to open up, but we can’t do them all. Therefore, there will have to be some difficult choices, and choices around schools clearly will be one of those,” he said.

Speaking outside 10 Downing Street earlier on his first day back at work since falling ill with coronavirus, Mr Johnson said Britain was turning the tide on coronavirus. But he said the country was at “the moment of maximum risk” when it would be dangerous to lift the lockdown too early.

“We must also recognise the risk of a second spike and letting the reproduction rate go back over one. That would not only be a new wave of death and disease but also an economic disaster and we would be forced once again to slam on the brakes across the whole country and whole economy and reimpose restrictions,” he said.

A total of 21,092 people have died of coronavirus in hospitals in Britain, an increase of 360 since Sunday. Prof Whitty said he believed the R number, which measures the infection rate, was between 0.5 and one, adding that the lower the number, the more leeway the government would have in easing the restrictions.

Chancellor of the exchequer Rishi Sunak said on Monday that, from next week, small firms would be able to access “bounce back” loans of up to £50,000 to help them reopen after the lockdown eases. The loans will be given by banks but guaranteed 100 per cent by the government, which will pay the interest for the first 12 months – during which borrowers will not be required to make any repayments.

Banks have been slow to lend to businesses which cannot show they will be viable after the coronavirus epidemic but Mr Sunak said the government would not guarantee 100 per cent of loans above £50,000.

“We should not ask the ordinary taxpayers of today and tomorrow to bear the entire risk of lending almost unlimited sums to businesses who may, in some cases, have very little prospect of paying those loans back and not necessarily because of the impact of the coronavirus,” he said.