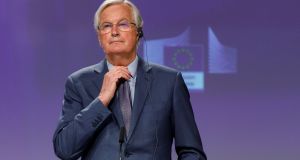 No progress has been made in the areas of starkest disagreement between the European Union and the UK in week-long talks on the post-Brexit relationship, held over video conference due to the coronavirus pandemic.

Lead EU negotiator Michel Barnier accused the British side of failing to engage seriously on some aspects, and said never before had such high-stakes talks had to take place under such time pressure, which was all the more difficult given the need to battle the pandemic and its severe economic fallout.

“In this context, the negotiation that has occupied us this week may appear out of touch. It has even been qualified as surreal,” Mr Barnier said following the talks on Friday.

Both EU and British sources said progress would have to seriously speed up in order for sufficient progress to be made, and an EU official said Mr Barnier was seriously worried about the prospect of not reaching an agreement.

“They listen politely to us presenting our text, but they don’t engage in some of the areas where they don’t have an interest to reach an agreement,” a senior EU official said.

“We don’t have much time, and we see that in some of the aspects that the British authorities know for us, the EU side, are indispensable to have an agreement in the end, they don’t want to move. This is why Michel Barnier is concerned.”

It was the first of three rounds of talks scheduled to be held before June, when Britain will have its final chance to opt for more time to negotiate its future relationship with its biggest trading partner.

British sources insisted that under no circumstances would they accept an extension of the transition period, which expires at the end of this year.

If no deal can be agreed between the UK and the EU by then, they will automatically begin trading on default World Trade Organisation terms, which is forecast to deliver a deep blow to the British economy and to its nearest neighbours, particularly Ireland.

Even if a deal is agreed, British negotiators say they are perusing an arrangement like those the EU has with Canada or Japan, which would entail significant barriers to trade.

The four areas of greatest contention are on the so-called “level playing field”, on the governance of the deal, on police and judicial co-operation, and on fishing rights, an area on which Britain has yet to submit a legal text of its position for negotiation.

The EU has said it will not grant tariff-free access to its single market unless Britain maintains labour and environmental standards and guarantees it will not intervene to give companies an unfair advantage. Britain has dismissed this as unacceptable.

On governance, the EU wants a single overarching framework while the UK wants a series of separate arrangements. The EU insists that Britain should guarantee continued adherence to the European Convention on Human Rights, and that the European Court of Justice should be the final arbiter on disputes that touch on EU law. Britain rejects the jurisdiction of the ECJ entirely.

“We will not make progress on the so called level playing field and the governance provisions until the EU drops its insistence on imposing conditions on the UK which are not found in the EU’s other trade agreements and which do not take account of the fact that we have left the EU as an independent state,” a British government spokesperson said.

British sources said they had used the latest round of talks to challenge the EU’s argument that Britain’s size and proximity to the EU made level playing field commitments essential, and they defended British labour and environmental standards.

They said there was no question of Britain continuing fishing quota agreements with other EU countries, which Brussels has proposed.

The two sides meet for further rounds of talks starting on May 11th and June 1st ahead of a high-level meeting before the end of June which will make the final decision on extending the transition.

Separately, the Specialised Committee on the Protocol on Ireland/Northern Ireland will meet next Thursday. The EU has emphasised that agreement of a deal depends on Britain demonstrating that it is enacting prior agreements, including on arrangements for trade between Britain and Northern Ireland, which the EU insists entails regulatory, sanitary and phytosanitary checks on goods entering the North from Britain.