Hundreds of thousands of protesters, many dressed in black, have marched through the streets of Hong Kong to demand their leader, Beijing-backed, Carrie Lam resigns. Video: Reuters 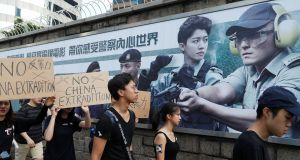 Before the mass street protests, the tear gas and the clashes with police, before the government went all out for legislation that could threaten Hong Kong’s special status in China, and then abruptly backed down, a pregnant young woman went on a romantic getaway to Taiwan.

Poon Hiu-wing (20) never returned to Hong Kong from that Valentine’s Day trip last year, but her boyfriend, Chan Tong-kai (19) did. He would later tell Hong Kong police that he had strangled her, before stuffing her body in a suitcase and dumping it in a thicket of bushes near a subway station in Taipei.

It was just a local crime story at first, the details dribbling out in the tabloid press. Then in February, nearly a year after Chan’s arrest, the Hong Kong government cited the case to propose legislation that would allow the city to transfer criminal suspects to Taiwan and other places with which it lacks an extradition treaty – including mainland China.

Seizing on the sensational crime as Exhibit A in a rushed campaign to push through the measure, Hong Kong’s chief executive, Carrie Lam, and her superiors in the Chinese leadership seemed confident they had a winning strategy. As it turned out, they badly underestimated public fear and suspicion of Beijing’s encroachment on this semiautonomous former British colony.

In a rare retreat for president Xi Jinping’s government, Lam finally yielded to the pressure Saturday, suspending her push for the legislation while resisting demands to withdraw it completely and resign. From the start, critics labelled the extradition plan a “Trojan horse” that would allow Beijing to target political dissidents and others in Hong Kong who ran afoul of party officials. As popular outrage spread, Lam and her allies stuck to the script, arguing that Hong Kong needed the Bill to bring Chan to justice – even after the authorities in Taiwan made clear that was not true. Taiwanese officials said as early as May that they would not seek Chan’s extradition under the proposed legislation.

Their objection to the Bill echoed that of the people of Hong Kong: the courts and security forces in mainland China, all controlled by the ruling Communist Party, could not be trusted. Lam’s repeated invocation of the Poon family’s grief was seen as just “political opportunism at its worst”, said Dennis Kwok, an opposition politician.

The Hong Kong police could not charge Chan with murder for a crime committed in Taiwan. Instead, he was held and eventually convicted on money laundering charges for using Poon’s credit cards after her death. In April, a court in Hong Kong sentenced him to 29 months in prison. With time served while awaiting trial and good behaviour, he could be released as soon as October. An autopsy indicated Poon had been four to five months pregnant.

For months, there was no sign the case would be at the centre of an international dispute. Then, in December, prosecutors in Taiwan obtained an arrest warrant for Chan. The government said it had reached out three times to authorities in Hong Kong to discuss how he might be extradited. All three requests went unanswered, according to Chiu Chui-cheng, a deputy minister of Taiwan’s Mainland Affairs Council, the agency responsible for policy toward China.

There were two interrelated problems: China does not recognise the government of Taiwan, which it considers part of its territory. And Hong Kong, which returned to Chinese rule in 1997, does not have an extradition agreement with Taiwan. Two months later, just before the anniversary of Poon’s killing, Lam made her move. Her government submitted papers to Hong Kong’s Legislative Council that cited the killing in proposing legislation that would allow extraditions on a “case-by-case” basis to jurisdictions with which Hong Kong lacks a formal extradition agreement.

The plan covered Taiwan – but also mainland China. And that was a big deal. Hong Kong had never allowed extraditions to mainland China – a safeguard agreed upon when Britain returned the territory and Beijing promised it a high degree of autonomy.

And yet Lam sought to sidestep the legislature’s regular committee process and put the proposal on a fast track with an unusually short 20-day public review.

Opposition built steadily. Thousands attended a protest against the measure in March, and in April tens of thousands rallied against it outside the Legislative Council. Politicians arguing about the Bill scuffled in the legislature; one was carried out on a stretcher.

Lam, a career civil servant who was installed by Beijing in 2017, assured the public that the legislation would not apply to political crimes. But even within her insular council of advisers – like herself, unelected – there was unease. The territory’s top finance officials, for example, were dismayed when they learned the Bill would also allow Beijing to begin requesting freezes on assets in Hong Kong.

Then, in May, Taiwan dramatically undercut Lam’s argument by declaring it would not seek Chan’s extradition even if the Bill passed. “Without the removal of threats to the personal safety of nationals going to or living in Hong Kong caused by being extradited to mainland China,” said Chiu, “we will not agree to the case-by-case transfer proposed by the Hong Kong authorities.”

Lam has said she decided to pursue the extradition law herself, without prodding from Xi or other Chinese leaders. But China’s propaganda outlets took a hard line against the Hong Kong protesters, accusing them of conspiring with China’s enemies abroad. Several senior Communist Party officials in Beijing also endorsed the legislation.

That helped transform the debate into a broader fight over the erosion of civil liberties under Chinese rule – and Hong Kong’s future as a global financial centre. For five years, since the failure of the Umbrella Movement demanding free elections, Hong Kong’s pro-democracy opposition had been on the defensive. But the extradition Bill gave it a chance to rally the public against something easy to understand: the possibility of being arrested and sent to mainland China.

On Friday, Lam quietly travelled across the border to the mainland city of Shenzhen, where she consulted with senior Chinese officials. Some had flown in from Beijing, and a few of the Communist Party’s top experts on Hong Kong were there, too. (Xi was out of the country, celebrating his birthday with president Vladimir Putin of Russia at a regional summit in Tajikistan.)

There was a consensus: given the public’s reaction, Lam should delay the legislation indefinitely. Announcing the decision on Saturday, she raised Chan’s case again in defending the measure, but finally acknowledged that Taiwan’s position meant there was no rush to pass it. “We will adopt the most sincere and humble attitude to accept criticisms and make improvements,” she said. – New York Times