Hong Kong’s pre-election calm: ‘This is the beginning, not the end’

As the city prepares to vote on Sunday, none of its 31,000 police will be getting a day off 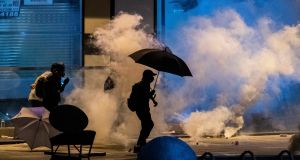 District elections in Hong Kong are typically low-key, predictable affairs but in these combustible times a fraught dynamic is driving people to the polls.

As the public readies to vote on Sunday, none of the city’s 31,000 police will be getting a day off. Joining them on duty will be more than 3,000 riot control officers and crime investigators, as the former British colony remains on tenterhooks following weeks of unprecedented anti-government violence.

The number of young voters registering has surged, and the ballot is expected to be a referendum on the government’s handling of the on-going crisis

For a city long noted for its orderliness, the heightened security levels point to the impact that escalating protests are having on the financial hub.

In the last election four years ago, 68 of the 452 seats went uncontested, but in this year’s politically-charged atmosphere, every seat will be challenged for the first time.

Pro-government forces normally hold sway, taking 68 per cent of the seats in the current council, compared with 28 per cent for pro-democracy lawmakers. But as youth-led protests polarise the city, a shift is now expected.

“It is an opportunity for the protesters to make their anger felt on a different platform,” says Alvin Cheung, who has joined the frontline clashes against police in recent months.

The number of young voters registering has surged, and the ballot is expected to be a referendum on the government’s handling of the on-going crisis. In some recent opinion polls the government’s approval rating has plummeted from 60 per cent to about 20 per cent.

While older voters, who tend to be pro-establishment, still make up the polling majority, pro-democracy lawmakers are hoping to use the protest momentum to gain ground.

“The whole so-called election system is a farce. But if we win more seats here at least we can have a greater say in who will be the next chief executive,” says Cheung, referring to the 10 per cent voting bloc councillors have in the 1,200-strong committee that votes for the city’s leader every five years.

“That’s not real democracy, of course, but as we are fighting for full democracy we will use the current system to engage with the people as best we can,” he says.

In a controversial move last month, officials barred democracy activist Joshua Wong from running for election, saying his calls for self-determination for Hong Kong ran counter to the city’s de facto constitution. In the run-up to the vote, dozens of election candidates’ offices have been vandalised, and several lawmakers on both sides of the divide have been violently attacked.

Campaigning has been subdued, as candidates and supporters fear public confrontations. Pro-Beijing shops and businesses that normally display campaign posters have refrained this year.

The vote comes in the wake of two weeks of unrest that paralysed whole sections of the city. Protester anger was fuelled after one of their ranks died when he reportedly fell from a height while running away from riot police; another was critically wounded after being shot by an officer at close range.

As protesters vented their anger, critics were often set upon by mobs. One man was set alight during an argument with a demonstrator and suffered 40-degree burns, while a 70-year-old bystander was killed after he was hit on the head with a brick reportedly thrown by a protester.

Ratcheting up the pressure, pro-democracy demonstrators called for a general strike and a campaign of maximum disruption on the city’s road and rail system. Occupying five universities, they orchestrated days of mayhem that culminated in a major clash with riot police outside the Polytechnic University.

Last Sunday several hundred protesters barricaded themselves into the campus as the police put them under siege. Over the course of the week more than 1,000 students have given themselves up, including 300 under the age of 18, but there are still dozens inside the campus holding out. The more hardcore elements among them have threatened to blow up entrances if the police storm in.

The ruptured nature of the city was clear on Monday, when thousands of white-collar workers and retirees joined human chains more than 1.5km long to pass petrol bombs and bricks up to the frontlines, where teens and young protesters were going toe-to-toe with riot police launching tear gas and rubber bullets.

Over the past two days an eerie calm has befallen the city. Protesters are conscious of a government warning that the elections will be cancelled if violence levels ran high.

“Whatever you do, don’t get arrested until at least Sunday night,” one protester commented on social media.

Both Beijing and the local government appear keen that the elections go ahead, even if pro-establishment candidates get a drubbing, fearing a cancellation or postponement would be a catalyst for fresh rounds of violence.

On Thursday, outside the Polytechnic University, a group of six deflated young men shuffled down the steps to surrender to the waiting police, after being holed up inside for five days. They walked in a row, each one’s left hand on the shoulder of the person in front. “I am healthy and mentally stable. I have no intention of taking my own life. I will never commit suicide,” one of them shouted to a medic.

It is a common mantra, as many fear they will be beaten in custody, and protesters publicly question if some recent apparent suicides were in fact murders.

While the numbers in the university siege dwindle, protesters vow to keep the movement going. “The government hopes that when PolyU is over, the protests will be over,” says Cheung. “But this is not the end. This is the beginning.”

The surrendering six joined the estimated 6,000 protesters who have been arrested to date, many of them facing charges of rioting which carries a maximum 10-year prison sentence.

Thousands have received hospital treatment, forcing medical staff to urge people to stay away at times unless in an emergency. The hospitals would be busier but many wounded protesters refuse to go to them, fearing that medical staff are colluding with police and they could be arrested while receiving treatment.