Russian opposition under pressure amid fresh raids and accusations 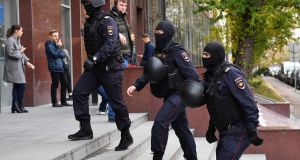 Russian law enforcers ratcheted up pressure on Alexei Navalny on Tuesday, raiding the opposition leader’s offices across the country for the second time in just two months.

Russia’s investigative committee announced that raids were taking place in 30 regions as part of an ongoing inquiry into suspected financial crimes by Mr Navalny’s Anti-Corruption Foundation. Several employees of the foundation had been called in for questioning, it said, without specifying any names.

Allies of Mr Navalny said the massive police operation was aimed at intimidating the opposition and crippling the foundation, which publishes investigative reports into the misuse of state funds by Russian officials, including members of president Vladimir Putin’s inner circle.

Helmeted police wielding batons swarmed into the foundation’s offices in more than 25 Russian cities before dawn on Tuesday, seizing computer technology and documents. The homes of some of Mr Navalny’s associates and their relatives were also targeted.

“Cowardly loafers in little black hats are running about our offices,” Mr Navalny wrote on Twitter. “It’s already simply some kind of routine.”

Leonid Volkov, Mr Navalny’s campaign manager, said law enforcers were also searching the homes of the foundation’s staff and supporters. “Even former employees, relatives and the ex-wives of employees” were being targeted, he wrote on Twitter.

One of the Kremlin’s most popular and outspoken critics, Mr Navalny has been facing mounting official pressure since a wave of big anti-government demonstrations erupted in Moscow this summer over the disqualification of opposition candidates from a city parliament election.

At the height of the protests in August the investigative committee, the main federal investigating authority in Russia, froze the bank accounts of the Anti-Corruption Foundation, claiming the organisation had laundered 1 billion roubles (€14.3 million) of illicit funds obtained from unnamed third parties over a period of years.

The foundation has denied the charges, saying the sum it was accused of laundering was far larger than the donations it had received to finance its anti-corruption investigations.

Tuesday’s police raids came less than one week after the Russian justice ministry classified the foundation as a “foreign agent”, a label frequently used in Mr Putin’s Russia to brand non-governmental organisations critical of the Kremlin. Explaining the move, the ministry said the foundation had received funds from foreign sources, including more than $2,000 from a Florida-based company that sells doors. Mr Navalny denounced the accusations as lies.

Mr Navalny is widely considered the only opposition leader capable of challenging Mr Putin. But the Russian president has never mentioned his arch foe by name in public or even acknowledged his existence. However, Kremlin-controlled television has taken to discrediting Mr Navalny since this summer’s election protests in Moscow.

In a derogatory report on the demonstrations last Sunday, the state Rossiya 1 TV channel broadcast goofy videos of Mr Navalny surrounded by youthful supporters, identifying him as a ringleader of a subversive and violent opposition movement.

In an emailed statement to his supporters on Tuesday, Mr Navalny admitted that the intensifying legal onslaught was complicating life for the foundation, but said it was also strengthening the opposition’s resolve. “We are doing the right thing. And those who are against us are the enemies of Russia,” he wrote.